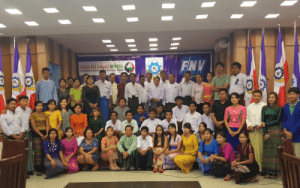 Union Aid Abroad – APHEDA works with Myanmar Industry Craft Services –Trade Unions Federation (MICS-TUsF) focusing on trade union development agenda and labour law reform. Within the period between May and December 2018, MICS, through the project collaboration with APHEDA has recruited over 5,000 workers. The current total number of MICS members is 12,536. MICS-TUsF has also been active in taking up various initiatives pursuing labour law reform in Myanmar. The Labour Consultative Forum (LCF) is one activity aimed at improving the dispute settlement mechanism in Myanmar.

With support from Union Aid Abroad – APHEDA, MICS-TUsF has successfully organised a new initiative, the Labour Consultative Forum that took place on March 19, 2019. Around 40 activists from various trade unions and workers’ rights groups participated. The Forum facilitated discussion around dispute cases resolved at the civil court and the mechanism of dispute settlement at the arbitration body and council. The Forum was organised as part of the preparation of the second National Dialogue Forum on the labour court setting in Myanmar, which will be held May 14-15, 2019.

“This forum serves as an initial discussion among unions and workers’ rights groups to prepare for the second National Dialogue Forum on the labour court in Myanmar. The role of MICS-TUsF is to facilitate this meeting. The discussion and follow up action will be our collective effort to contribute to the trajectory of the labour court setting and improvement of the dispute settlement mechanism in this country,” said Thet Hnin Aung, the General Secretary of MICS-TUsF in his opening remark.

During the discussion, participants from the Mandalay region mentioned that at present, there are at least eight unresolved cases in the regular court. The workers argued that the judge and prosecutor are not competent in handling dispute cases. The meeting also addressed the procedural inconsistencies of the arbitration bodies at the regional level.

The Minister of Labour, Immigration and Population (MOLIP) issued a directive order in January 2019 asserting that it is compulsory for all registered companies to set up a Workplace Coordination Committee (WCC). The WCC should serve as a platform for workplace dispute settlement. Unresolved cases could be mediated at the Township Conciliation Body (TCB) based on the consent of the two parties – the employer and the workers concerned. The unresolved individual (rights-based) cases at the TCB should be settled at the competent court while unresolved collective (rights and interest based) disputes should be settled by the arbitration body.

At the meeting, the participants addressed that in practice some collective disputes that were unresolved by the arbitration bodies were sent to the court. In this context, they questioned the voting mechanism by the arbitration body to decide which cases are sent to the court. In May, the LCF will further discuss how to improve the dispute settlement mechanism in Myanmar as well as contribute some input for the setting of the labour court. In the future, the LCF will hold regular meetings to discuss the trajectory of improving the labour regulatory framework in Myanmar.