Building Strength and Power Among the Karen Women of Myanmar 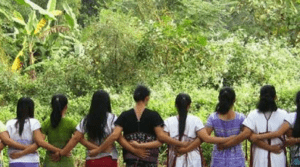 The Karen Women’s Organisation (KWO) was formed in 1949 as a member based organisation of Karen women working in development and relief in the refugee camps on the Thai-Myanmar border, and with internally displaced people (IDP’s) inside Karen State, Myanmar.

Since their formation, they have expanded their membership base to over 60,000 with branches in all Thai-Myanmar border refugee camps, and in seven districts in Karen State, Myanmar. KWO has shifted their focus since their inception from purely providing social welfare services, to now promoting women’s participation in community decision making and political processes and defending women’s rights. KWO has long advocated that the contribution of women is an essential factor in the peace-building and national reconciliation processes of Myanmar.

Union Aid Abroad APHEDA has supported many of KWO’s projects over the years. One current project that is funded by APHEDA (with part funding from the Australian aid program), is the ‘Capacity Building Project’. This project provides women in communities and refugee camps with the opportunities to gain skills that enable them to fully participate in community leadership roles.

Here’s an overview of the ‘Capacity Building Training Project’:

This training is tailored for executive position holders of the KWO and their staff. Training is selected based on the needs and roles of the participants and on KWO’s strategy planning and builds effective KWO organisational leaders, planners and decision makers. During the last reporting period from July 2016 to February 2017, KWO provided 4 different workshops for a total of 123 KWO staff and leaders.

Due to the ongoing resettlement of refugees by the UN, KWO continues to lose valuable position holders who are trained and experienced. Continual training of KWO position holders in camps is critical to maintaining strong and capable KWO leadership in the refugee camps despite the high turnover of leaders. From July 2016 to February 2017 a total of 52 training days were provided in 3 camps with a total of 197 participants.

Moving forward, the Union Aid Abroad APHEDA-funded Capacity Building Project will enable KWO to play a strong advocacy role throughout the ongoing peace building process. It will also continue to enable KWO to promote and support strong community leadership roles for women in the fast developing Karen State. KWO has been a leading voice campaigning against sexual violence in Myanmar and this remains a critical priority issue in the year ahead.