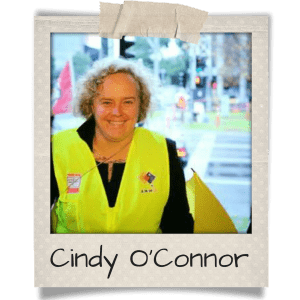 Meet Cindy. Cindy O’Connor is a Melbourne based union organiser, educator and community campaigner who is currently working in the OHS team with the AMWU Victorian branch. Cindy joined her first APHEDA study tour to Timor Leste in 2009 and returned to visit APHEDA Country Manager Elisabeth de Araujo in January 2019. Cindy joined APHEDA back in 2004 whilst doing ship inspections with the MUA and ITF. An official from MUA pushed a form into Cindy’s hand and she has been an active member ever since! Cindy says it is the best decision she has ever made!

Union people share enthusiasm and passion for changing the world. We connect wherever we met up in the world. I can be having a chat in Timor Leste with local delegate Julio about a union approach to health and safety one week and then be having a similar chat with Debbie from Maryborough in country Victoria. We are all organising for decent work and dignity.

Union Aid Abroad – APHEDA Timor Leste Country Manager Elisabeth Araujo and all the comrades in Timor are my community and epitomise what being APHEDA means to me. We all meet at the intersection of solidarity, feminism, decolonisation and development with dignity. Being a member (Global Justice Partner) is a constant source of motivation. We are all egging each other on to make a real difference.

Why do you think it’s important for APHEDA to grow its membership base?

If you are a union member and not yet a member of APHEDA then you are just camping out in one corner of global solidarity. Do yourself a favour and join the movement. There are thousands of mates waiting to meet you…c’mon!

Organising and activism! The best fun we had was signing up members at an ACTU Conference in Sydney. Jill Biddington – now APHEDA’s Pacific Organiser – was the first union trainer I met and that was back in 2000. Years later at this conference we competed with each other to have the most 1:1 conversations and we kept a mini whiteboard with recruitment numbers. We even recruited people to recruit. I always learn about building mega capacity when I track down a mentor like Jill. We converted over 100 new members.

What are some ways you can actively get involved in Union Aid Abroad – APHEDA?