A new report produced by Union Aid Abroad-APHEDA and ALTSEAN Burma has described how the military junta has “shattered” Myanmar’s economy.

Drawing on data from the World Bank, Asian Development Bank and the International Labour Organization, the report gathered evidence to show Myanmar’s economy shrank by 18% last year and is expected to remain “critically weak” over the next 12 months, with a projected growth rate of just 1%. 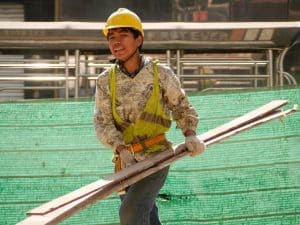 The impact of this economic collapse on ordinary people has been severe. Around 1.6 million jobs were lost last year, and extreme poverty is growing. The report estimates that 46.3% of the population will be in poverty by early 2022, up from 24.8% in 2017. Research by the International Labour Organization showed that “hours worked fell by an estimated 18% from 2020, equivalent to the time put in by 3.1 million full-time workers. Agriculture, construction, garment, and tourism and hospitality were among the industries hardest hit, losing 27–31% of all jobs.”

The report shows data from the UN Office for the Coordination of Humanitarian Affairs that projected 14.4 million people in Burma will need humanitarian assistance and protection in 2022, up from 1 million in 2021.

A widespread boycott of military products led by the Civil Disobedience Movement has also created a downturn in revenue collected by the junta. The report states that the junta had “lost around USD $1 billion in revenue from its military-operated power company since 1 Feb 2021, due to people refusing to pay their electricity bills.”

The economic decline has been so severe, it has forced the junta to turn to natural resource extraction for much-needed foreign revenue, leading to a dramatic increase in illegal logging and mining, worrying environmentalists.

The oil and gas industry also remains a lucrative industry for the military junta. Foreign companies have paid the state-owned Myanmar Oil and Gas Enterprise, USD $1.5 billion this year. Oil and gas companies operating in Myanmar do not only provide funds and legitimacy to the junta, but are expanding their projects. After intense civil society pressure, Chevron (US), TotalEnergies (France), and Woodside Petroleum (Australia) announced earlier this year that they would leave Myanmar.

Despite the damage caused by the military junta, Australia has not imposed sanctions against it, unlike the UK, USA, EU, and Canada. 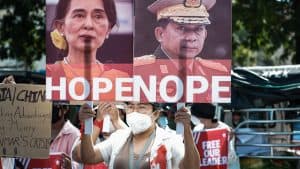 oad-APHEDA Executive Officer Kate Lee said: “This is the most serious economic disaster in Australia’s immediate region. Union Aid Abroad-APHEDA continues to join the united calls from across Australian civil society and its Myanmar diaspora representatives, for the Australian government to join its allies of the UK, US, Canada and the EU and impose targeted sanctions on senior military leaders and their military-owned businesses. To date, Australia has shockingly not imposed a single sanction.”