One step closer to listing asbestos in Rotterdam Convention

Switzerland, Australia and Mali have proposed an amendment to reform the Rotterdam Convention, a multilateral treaty to promote shared responsibilities in relation to importation of hazardous chemicals. This is an important milestone in our years’ long efforts to get chrysotile asbestos and the other blocked substances listed in the Rotterdam Convention so that their non-listing cannot be further weaponised to claim that these substances are not hazardous.

In June this year, the Russian Federation, supported by a small group of other countries, once again blocked a decision to list chrysotile asbestos in the Rotterdam Convention during the 10th Conference of Parties held in Geneva (COP10). The listing would have provided importing countries the ‘right to know’ if products contain chrysotile asbestos.

Ajat Sudrajat, a ban asbestos campaigner from our Indonesian partner Local Initiative for OSH Network (LION), attended the COP 10 and said: “What happened at the Rotterdam convention will not change the fact that chrysotile asbestos is a hazardous material which is responsible for killing more than 230,000 people every year.”

Rotterdam Convention COP 11 will be held 1-12 May next year and the fight for the necessary votes to pass the proposal at is underway. Getting it approved will require 75% of the votes of the parties “present and voting” (total number of parties is 165, but not all of them will be present and not all that will be present will be voting). 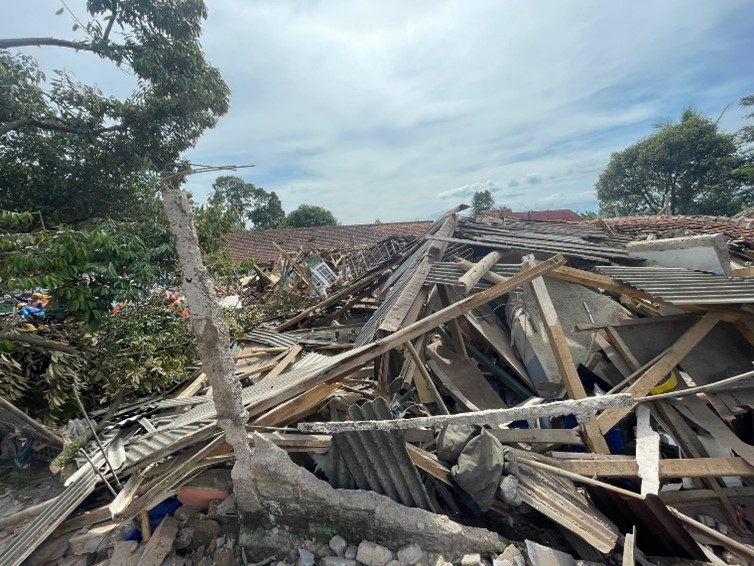 Asbestos roof sheeting in ruins after earthquake in West Java.

For Indonesia, the need to ban asbestos has never been more apparent than after this week’s earthquake in West Java which killed nearly 300 people, with hundreds more unaccounted for and thousands of homes destroyed.

Ajat was on the ground documenting the destruction and took these photos showing broken asbestos roofing sheeting on top of collapsed houses. During the clean-up, emergency personnel are seen desperately removing broken roof sheets to find survivors, unaware that they are being exposed to deadly, loose asbestos fibres. The communities devastated by the earthquake, will also needlessly suffer the legacy of asbestos-related diseases in years to come – a double burden from this natural disaster.

Asbestos is still widely manufactured and used in buildings across Southeast Asia. Union Aid Abroad-APHEDA works with unions and community orgs across South East Asia towards national asbestos bans. We collaborate with trade unions and civil society NGOs to reform the global convention that governs asbestos trade. To prevent asbestos bans from being blocked, the Rotterdam Convention needs to be reformed urgently. We are pleased that the Australian government is now taking a leading role in assisting a much-needed reform of the Rotterdam convention.

The project to eliminate asbestos related diseases in Indonesia is supported by the Australian Government through the Australian NGO Cooperation Program (ANCP) and members of Union Aid Abroad – APHEDA.