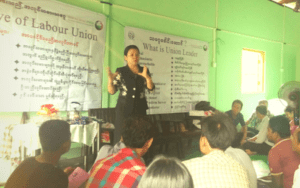 Union Aid Abroad – APHEDA began working with Labour Rights Defenders & Promoters (LRDP) in 2013, soon after the formation of unions became legal in Myanmar. Since then, LRDP has been working hard to organise workers and help the establishment of unions. More recently, LRDP has started working with home-based workers to better understand their situation in order to achieve better representation for workers and greater political recognition of their issues.

Background: the emergence of unions in Myanmar

In October 2011 Myanmar passed the ‘Labour Organisation Law’ that enshrined – for the first time in decades – the right of workers in Myanmar to legally organise and form labour unions.

This was a welcome development for workers and allowed independent trade unions to emerge and grow. However, the fledgeling trade union movement was in its early stages and faced many challenges such as workers being unaware of their rights and having little understanding of the role of unions in advancing their collective interests.

Activists come out of exile to advance workers’ rights in Myanmar

In response to these challenges, ‘labour support organisations’, staffed by local labour activists, began to emerge. These organisations specialised in worker education, trade union building/strengthening and dispute resolution. One such organisation was Labour Rights Defenders and Promoters (LRDP) who Union Aid Abroad APHEDA has partnered with since 2013.

Since its formation, LRDP’s main objective has been to assist in the establishment of democratic trade unions to defend and advance workers’ rights. With the support of Union Aid Abroad – APHEDA, LRDP’s ‘Capacity Building for Trade Unions’ project enables LRDP to hold union and workers’ rights workshops and training in targeted locations throughout Myanmar. Topics include dispute handling, communications and negotiations in the workplace, international labour standards and labour laws, trade union administration, recruiting and organising new members, International Labor Organization (ILO) Decent Work and ratified conventions, migrant worker rights and advocacy skills. These trainings have contributed to the rapid growth of trade union capacity in Myanmar.

Learning to organise from workers in India’s informal sector 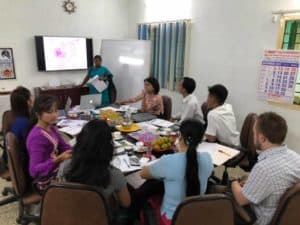 Members of LRDP and sister organisation ALR meeting with SAVE in Tiruppur, India.

Through a funding partnership with Union Aid Abroad’s sister organisation in the Netherlands, Mondiaal  FNV, representatives from LRDP and sister labour support organisation Action Labor Rights (ALR), participated in a capacity building exchange to India. They spent time with organisations and unions who have led successful campaigns to organise workers in India’s informal economy.

Myanmar, like India, has a high percentage of its workforce engaged in the informal economy, particularly within the garment and textile sector. Conservative estimates from the ILO indicate that 69.5% of Myanmar’s large garment and textile manufacturing workforce are engaged in informal work. These workers are generally home-based piece-rate workers or employed by small informal home-based factories. Legislation governing minimum labour standards often either doesn’t apply to this work or is largely ignored by the informal employers. These workers are often overlooked by union campaigns in Myanmar that largely target factories in the formal supply chain.

The challenge ahead: organising home-based garment workers in Myanmar

The capacity building exchange exposed LRDP to the success of strong informal garment worker unions in India and resulted in a plan to conduct participatory research into the informal garment sector within Myanmar’s largest city Yangon. This research involved one-on-one conversations with hundreds of informal workers in Yangon’s industrial zones. It was conducted to better understand the issues facing these workers and to assist in the development of a future organising campaign.

Moving forward through 2018-2019, both LRDP and ALR plan to further this initial research and develop improved organising initiatives that reach out to informal garment workers. LRDP will increase informal garment worker representation with the goal of achieving political recognition of their issues at the national level.

The continued efforts by LRDP and other labour support organisations in Myanmar serve as a great example of the contribution that inspired labour activists can make to their local union movement. Union Aid Abroad APHEDA is proud to work with LRDP and congratulate them on their efforts to date.