Organising Workers under a Military Coup in Myanmar 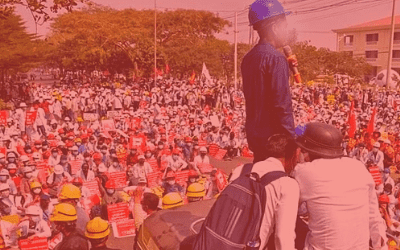 Between 2018 and 2020, Union Aid Abroad – APHEDA has been working with trade unions in Myanmar to improve their organising strategy and to encourage social dialogue for policy reform in favour of worker’s rights within. Here are some of the lessons learnt during the project implementation and how it could shape the unions’ power in coping with and operating under an authoritarian political system.

Union Aid Abroad – APHEDA has been working closely with trade unions and workers’ rights organisations to support them in identifying and seizing available opportunities to organise workers in a relatively democratic climate (2018-2020) with sufficient space for freedom of association. It has been a challenging process. Pushing for workplace collective bargaining and simplifying registration procedures for unions has been particularly challenging as has the work to see an improvement in the general dispute settlement mechanism. Significant achievements have been gained in improving the tripartite mechanism in regards to wages, labour court, increase in union membership and understanding of supply chains.

The military coup which took place on 1 February 2021 has the serious potential to thwart all past achievements. However, built into the foundation of Myanmar trade unions is their dedication to ensuring that workers’ rights are protected. They are also steadfast in supporting the movement to restore democracy. With international garment brands now making commitments to resume production, but with martial law currently in place in the industrial zones, organising workers will be far more challenging than before. With a better understanding of supply chains, some union leaders and activists have reached out to international brands to ensure the workers’ safety when they do return to work.

Protecting the rights of workers returning to factories

Based on discussions with some activists on the ground, there have already been some examples of brand representatives mediating dialogue between management and workers to ensure worker safety and to keep the Workplace Coordination Committee (WCC) intact. At one factory in an industrial zone where the manager has allowed the WCC to maintain its function, the union has managed to negotiate a safe shelter for all workers and also a daily wage increase during this difficult time.

Protecting workers who have taken part in the Civil Disobedience Movement

Some groups went even further to support essential workers to form an organisation to protect workers who have actively taken part in the Civil Disobedience Movement (CDM). This was initiated by introducing the principles of trade union rights and the basic rights of citizens. Volunteer legal groups were formed to assist workers facing retaliation from authorities to help them go through legal procedures. Some suspended teachers and university lecturers and staff have been charged. Yet they continue to strive for education alternatives to the education system imposed by the junta.

Despite the difficult situation and living under terror, workers in general have learnt that it is best to document and capture the situation on the ground. They have been documenting things such as the military extorting money from workers on the street and collecting fees from workers’ dormitories and other forms of surveillance. The military also inspected labour offices to check if unions were still active in representing workers’ disputes. All information sourced from workers is crucial in developing a mechanism to enable workers to access remedies and justice. Organising and advocacy at a local level must be performed in extremely cautious manner in line with the national collective struggle to reclaim democracy.

Multinational companies, especially in the garment, textile and banking sector, have decided to resume their production. In order for human rights and worker’s rights to be upheld, this process must be thoroughly reviewed and scrutinised. It is our global collective responsibility to ensure the safety of workers in Myanmar who must be able to exercise their rights to freedom of association and collective bargaining.

The prevailing political situation is not favorable to further develop and build on past achievements. Nevertheless, many successful outcomes have been highlighted in the months since the military coup came into effect. These include the capacity of organising, bargaining and using international instruments to contribute to the foundation of trade unions in performing their duties under authoritarian regime.