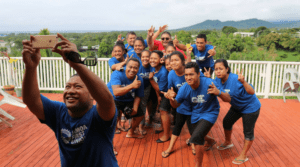 Samoa has a small economy and is suffering from the impact of globalisation and climate challenges.  Recently one of the nation’s largest employers, Yazaki Corporation which manufactures Toyota components, closed down. This means the end of nearly 800 jobs in Samoa. Some employees had worked at Yazaki for more than 25 years and the prospect of finding decent work in Samoa is declining. The NUW in Australia organises Yazaki’s parent company in Victoria. This has resulted in the NUW working alongside Samoa First to negotiate for the Australian Enterprise Agreement to apply to the Severance and Redundancy provisions for Yazaki workers. This will mean that the severance packages will be far greater than under Samoan Employment Law.

In the past 12 months, Samoa First’s main activity has been organising new members. An organising drive was held and staffed by NZ First Union organisers who signed up new members and supporters for Samoa First. Since founding the union, the focus has been to concentrate on the fundamentals of union building – recruit, educate, mobilise. Our role at Union Aid Abroad has been to guide and support the development of the union organisers and to help them build a sustainable union which is financially independent and which can play a leading role in bringing greater justice and equity for private sector workers.

Our collective work has resulted in:

Building a union is about more than workplace activity. SFU will play a key role in lobbying the Government to invest in decent jobs, improve workplace health and safety and work on issues around social justice and equity. SFU is building slowly and the Organisers in Samoa are working like any new organisers learning the skills of mapping and talking union and building worker committees.