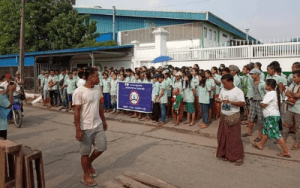 Union Aid Abroad – APHEDA works with Action Labor Rights (ALR) on the Decent Work for Working People Project. ALR was founded by a group of Burmese labour activists in 2012. It is a workers’ rights organisation focusing on organising workers mostly from garment and textile industries. In 2018, ALR helped establish workplace level unions at 29 factories with at least 11,000 workers joining the unions.

In 2018, through capacity building to improve the skills and capacity of workplace level union leaders in the ready-made garment sector, ALR has 4,867 verified financial members from the garment and textile sector. ALR is optimistic that by the end of 2019, the number of the financial union members will be doubled.

As a workers’ rights organisation, Action Labor Rights has developed new organising initiatives. These include capacity building for the Workplace Coordination Committees (WCC) in the enterprise, and dispute settlement negotiations through engaging with the Yangon Regional Government. By supporting the formation and capacity building of WCC members at six factories, workplace union leaders are now well equipped with the skills and knowledge for dispute resolution. According to ALR’s records, union leaders receive around six to ten individual dispute cases each day.

Framing this achievement in the context of an organising strategy, ALR has successfully introduced positive behaviour on by both workers and employers. Both parties are now accustomed to dialogue and negotiation in resolving disputes. Thanks to a series of dialogues and negotiations, union representatives on the WCC at two factories, Hanson and VIP, are now given sufficient time to deal with grievances raised by workers. At those two factories, union representatives have successfully participated in deciding reasonable daily production targets.

Another notable achievement is the establishment of dialogue with the Yangon Regional Government. ALR worked hard to convince the regional government to ensure factories were legally compliant. This year, ALR has successfully helped negotiate resolutions for at least 8 cases ranging from compensation issues, dismissal of union leaders, and with the closure of factories impacting 4000 workers. Another recent success story was advocating for workers at the Hao Yuan garment factory, where individual dispute cases were referred to the civil court. Through dialogue with the Yangon Regional Government, the cases were all successfully resolved.

Action Labor Rights is aware that workplace social dialogue can be a tool to protect workers’ rights. ALR’s training for union representatives in the WCC has successfully built the capacity of union leaders in negotiating better working conditions. This is part of a long-term process by unions to shape the collective bargaining mechanism, which is still absent from the regulatory framework in Myanmar.

Over the next 12 months, ALR will continue expanding their organising in four townships in Yangon: Hlaing Thar Yar Industrial Zone, Shwe Pyi Thar Industrial Zone, Thanlyn and Insein. Training for WCC members will focus on how to attract workers to join workplace unions. ALR has big goals. They aim to double the number of fee-paying union members by the end of 2019 and provide training on trade union management. The training will include the introduction of monitoring tools for unions to monitor membership and fees paid, and to ensure accountability of union leaders. Another key focus of ALR is to actively promote sexual harassment-free workplaces.

In order to achieve these goals, Action Labor Rights will continue collaboration with other unions and workers’ rights groups to improve the dispute settlement mechanisms in Myanmar.

Become a Global Justice Partner today and contribute to Union Aid Abroad – APHEDA’s work in Myanmar. Yes, sign me up!