“Their cause is our cause, their fight is our fight”: Australian Unionists Rally in Solidarity With Workers in the Philippines

In Sydney, Melbourne, Canberra, and Perth, Union Aid Abroad – APHEDA activists joined with the ACTU and Australian unions to tell the Duterte government to #StoptheAttacks. See all the photos from the rallies below 📸

“The struggle for dignity, for decent paying jobs, for workplace rights does not stop at the border. Wherever workers are being exploited and denied their basic human rights, it impacts upon us. Wherever unions are being attacked by authoritarian governments, it gives further impetus to our government to do the same to us.” 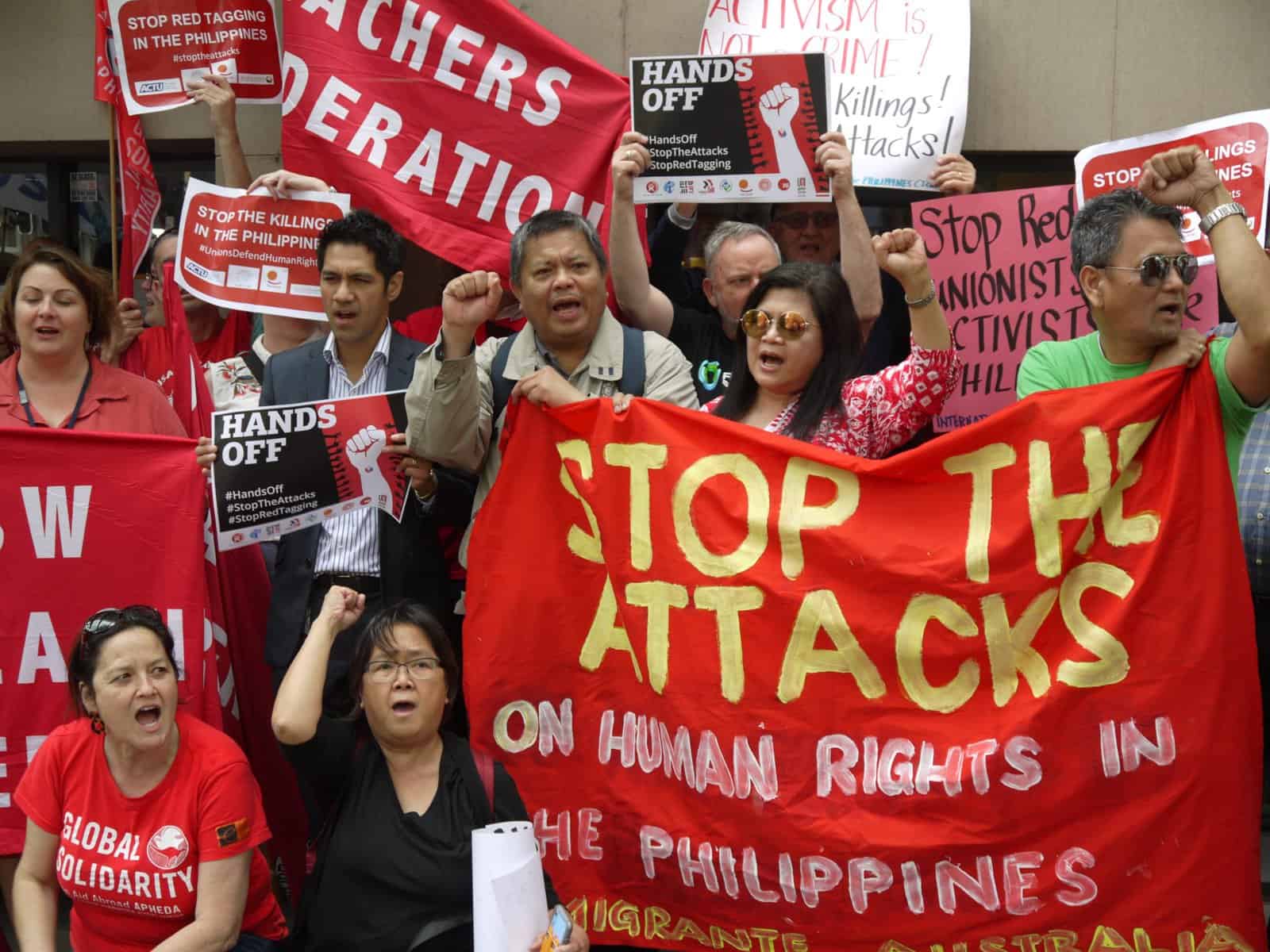 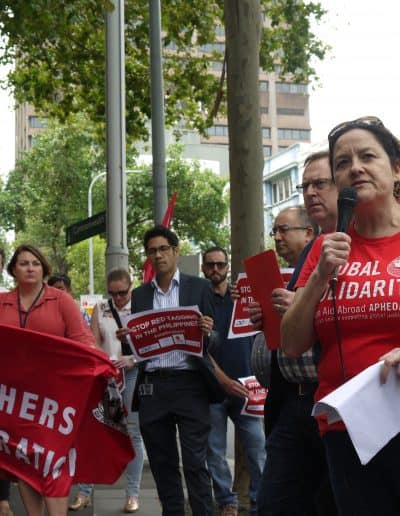 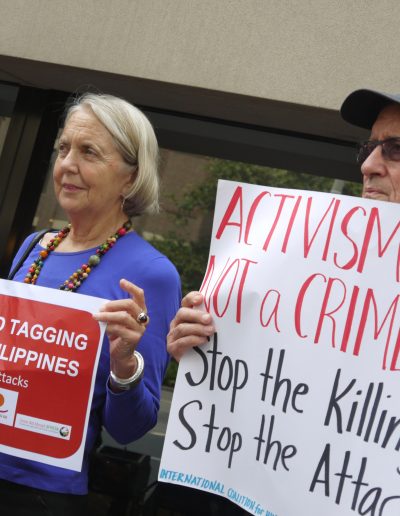 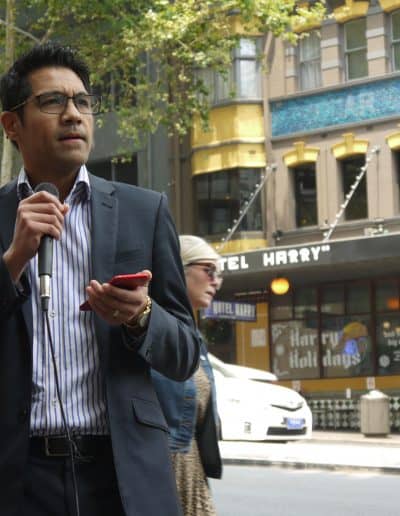 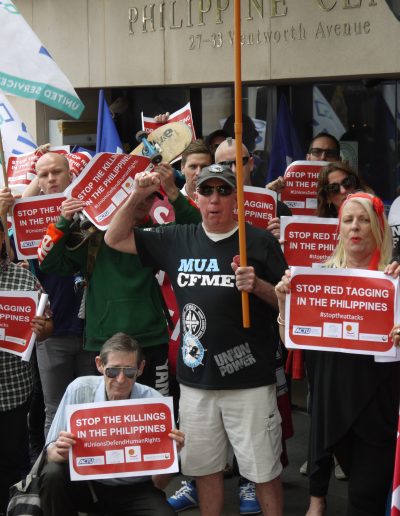 At the Philippine Embassy, Canberra union members gathered to tell the Philippine government that working people around the world will not stand silent while killings, false arrests, and raids on union offices continue. 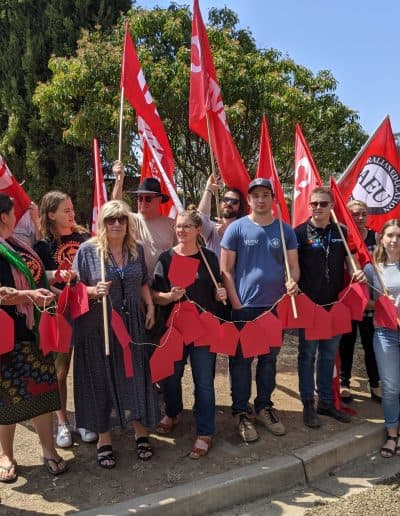 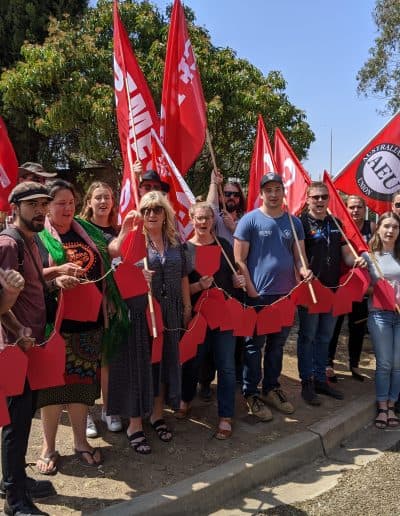 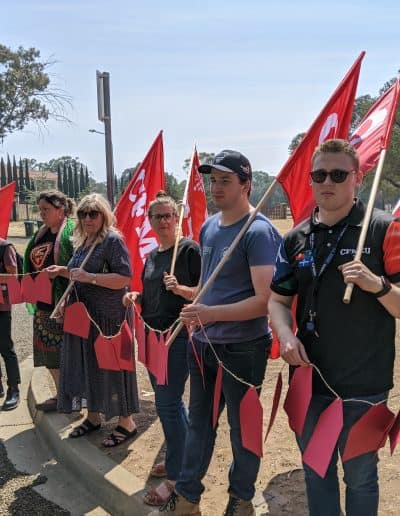 Perth unionists tell Duterte: “Unionism is not a crime!”

The West Australian union movement rallied a large number of union members together at the Philippine Consulate General on the outskirts of Perth. 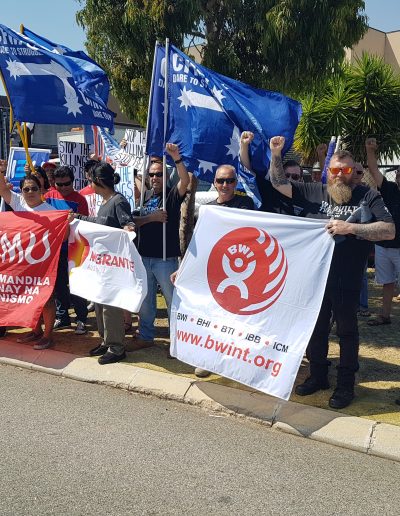 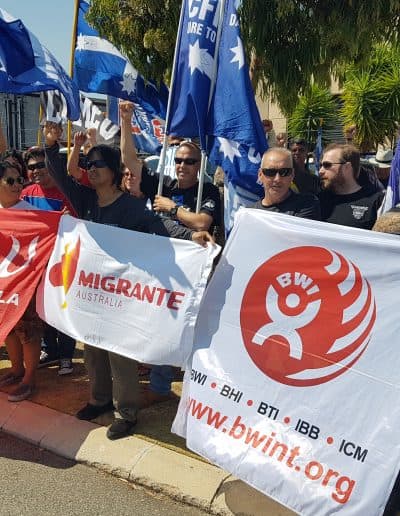 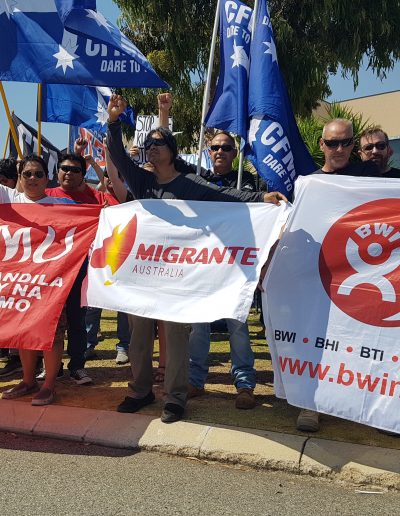 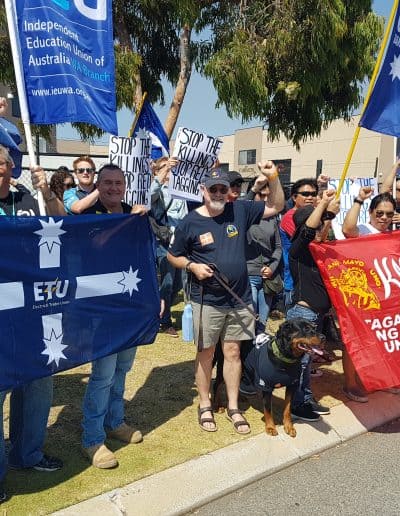 Melbourne calls on Duterte to #StopTheAttacks!

In Melbourne, union members sent a message to the Duterte regime that the world will not remain silent before the continuing attacks on trade unions in the Philippines. 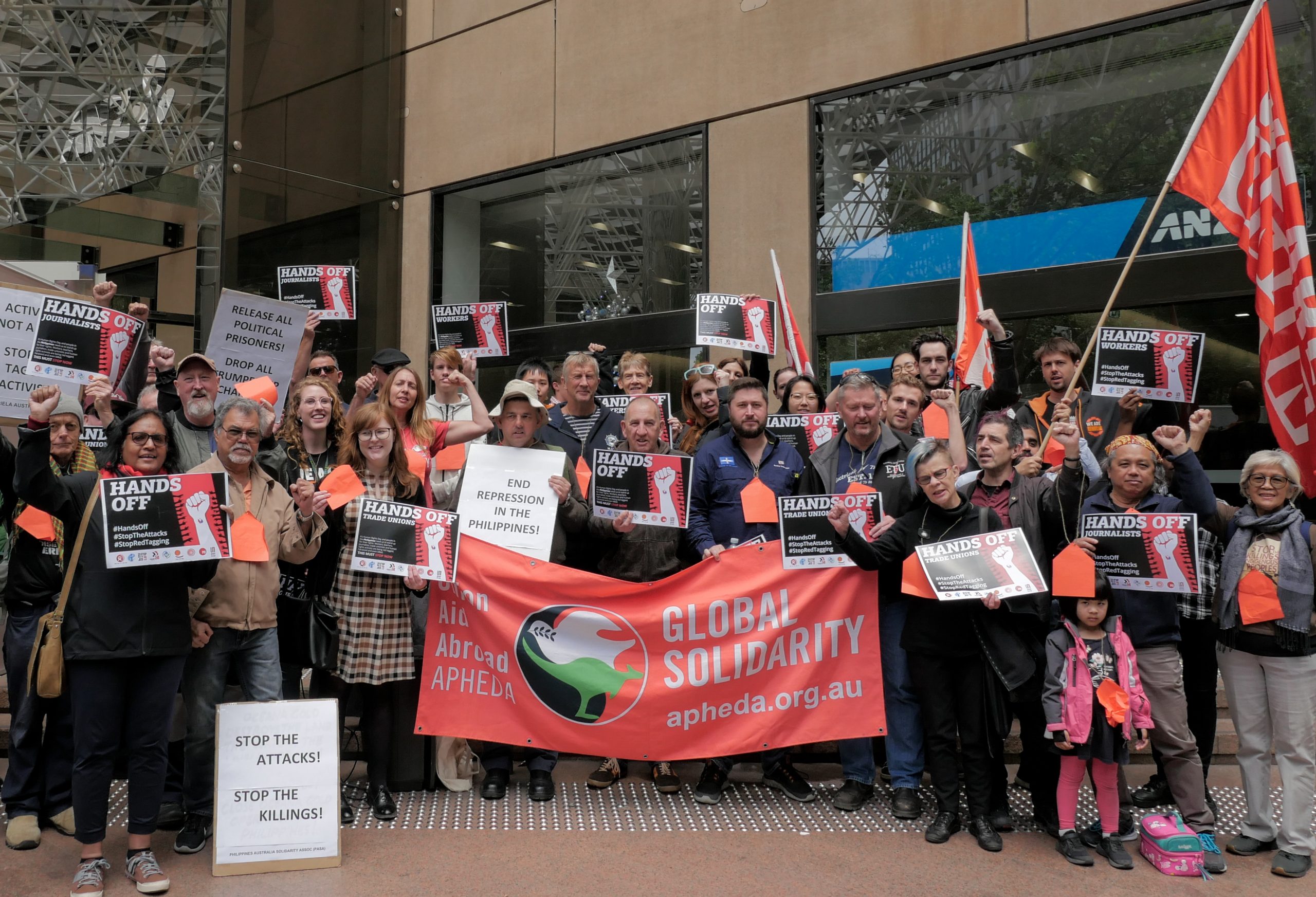 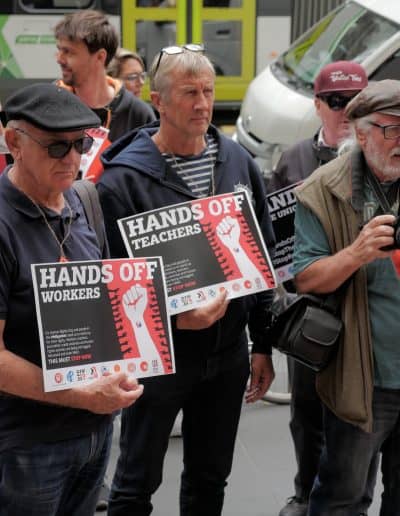 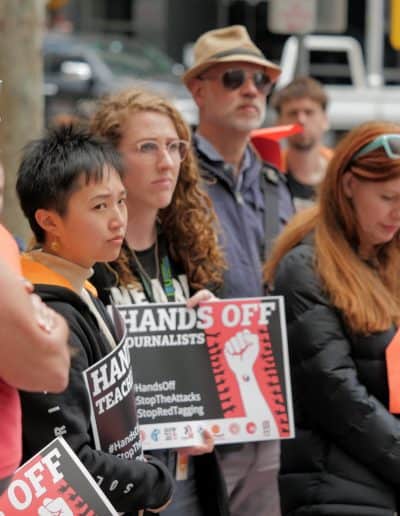 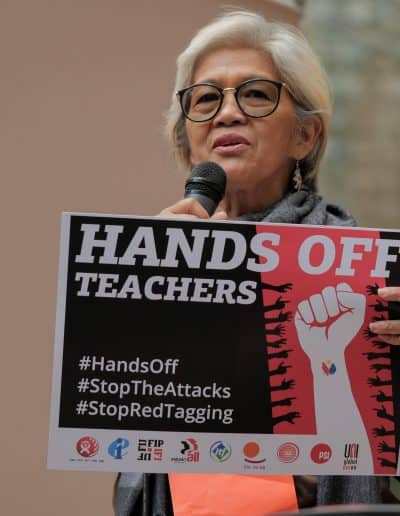 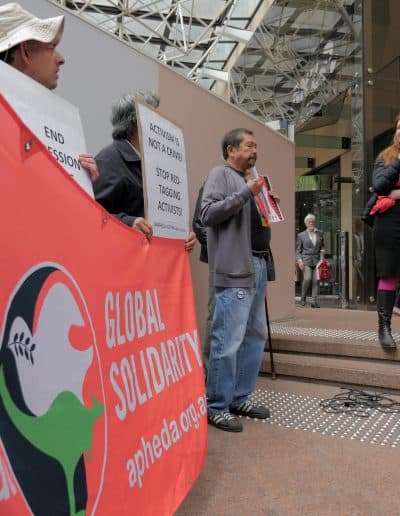 From February 17 to 28, Union Aid Abroad – APHEDA supporters will again have the chance to stand in solidarity with unionists in the Philippines. Union Aid Abroad – APHEDA, together with the Australian Manufacturing Workers Union (AMWU), will be hosting a solidarity tour by the General Secretary of the Kilusang Mayo Uno (KMU), Mr. Elmer Bong Labog, and the KMU International Officer, Ms Meryl Quero-Asa.

The KMU is an independent national trade union federation in the Philippines that represents over 115,000 union members across most industries in the Philippines. Because of the KMU’s campaigning for secure work, trade union rights, and climate action, it has become a target for growing government repression.

Union Aid Abroad – APHEDA supporters and members will have a chance to hear about these issues from Febuary 17 to 28 in Sydney, Canberra, Melbourne, and Perth. To see all the details and register your attendance,click here.

Across the globe, trade union repression is on the rise and authoritarian governments are cracking down on democratic rights and freedoms. In times like these, we need to stand side by side with our brothers and sisters overseas. By joining Union Aid Abroad – APHEDA, you can show them that the world is watching.