This month the people of Timor Leste are celebrating 20 years of independence. After the referendum in 1999, Timor Leste officially became a nation on May 20, 2002.

Throughout their decades-long struggle for liberation from Indonesia, many people around the world stood with them in solidarity. Union Aid Abroad-APHEDA played an important role in linking Australian unions with the independence struggle and supported efforts to rebuild the country.

APHEDA’s country manager in Timor Leste Elisabeth de Araujo remembers this solidarity. “Over the last 20 years, the Australian union movement has really supported the people of Timor-Leste and that solidarity continues today. Through actions like boycotting Garuda flights [between Australia and Indonesia] they helped put pressure on the Indonesian Government. 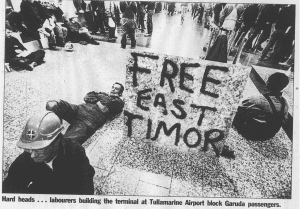 A newspaper clipping of unionists protesting at Garuda airlines in Australia.

“They helped establish trade union confederations. The CFMEU supported vocational centres which are still in use. During last year’s floods Australian unions raised money to help affected families. We have very close relations and we still need support.”

“When the trouble did hit with the militia and killings after the vote, there were a significant number of union leaders and ACTU Executive who had been to East Timor, understood the situation, and knew about the Timorese peoples’ yearning for independence.”

Jennings remembers that when Indonesia withdrew from the country, the immediate priority was emergency assistance with healthcare and housing. APHEDA helped mobilise unions to provide practical help in reconstruction. 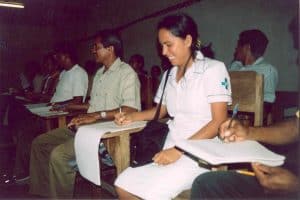 “The NSW Nurses Union got drug companies to donate medicine, and they sent a container of medicine to Dili Hospital. The Australian Education Union and Independent Education Union sent supplies to schools, and later assisted with teacher training and strengthening the East Timor Teachers Union. Asbestos was also a crucial issue as many of the destroyed buildings contained asbestos, and the CFMEU educated the people about the safe removal of asbestos.

“After the initial emergency phase, APHEDA also began working on the development of a trade union movement in East Timor. APHEDA also began working on skills training, especially in training carpenters to rebuild houses, community radio, computer training for office workers and establishing a Working Women’s Centre, with an emphasis on strengthening the rights of domestic workers. At this stage, a vocational training centre was also established in the capital, Dili.”

Sharan KC is the APHEDA Programs Manager and worked in Timor Leste in 2002. He said that APHEDA continues to provide assistance today through programs that aim to support people to collectively find their own solutions.

The General Workers Union (SJT-TL) in Timor Leste preparing for May Day in 2019.

“The majority of the Timor Leste population are small-scale farmers and form the basis of the national economy. However agricultural production is low, and farmers’ income is insecure. Local food and cash crop production do not meet national or export demands. ‍‍‍According to ILO, more than 85% of Timor Leste workers are informal sectors like agriculture, construction, domestic work, and retail.

“APHEDA is working with Timorese civil society organisations to strengthen independent farmers’ organisations from the local to the national level through the identification of issues, development of community leaders, mobilising of community members and intensive education in the areas of food production, agricultural economics and agricultural technology.” 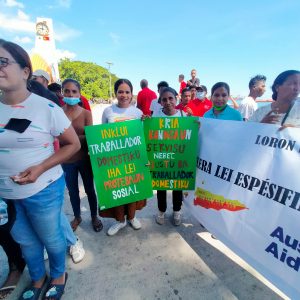 Women domestic workers at May Day in 2022.

Sharan KC also mentioned the importance of supporting women. “60% of working women in Timor Leste are employed informally, often grouped in the least secure and lowest-paid positions both by sector and within sectors. Without unions, labour regulations or a strong social security system, these women are particularly vulnerable to violence, exploitation, economic hardship, harassment, and social and political exclusion. ‍ There is currently no opportunity for informal women workers in Timor-Leste to develop a collective voice and influence the government, policymakers, NGOs, employers, and other authorities with the power to influence their lives.

“The impact can be severe: domestic workers, street and market vendors and waste pickers for example, are vulnerable to workplace hazards; intimidation and extortion by authorities or ‘security’ personnel; competition among themselves and private enterprises; child labour; economic exploitation; dangerously long working hours, no access to sick leave, annual leave, or overtime pay and a lack of social supports and protections.

“APHEDA is working with the Working Womens’ Centre to improve working conditions for informal-sector and vulnerable Timorese women workers and provides advice to all working women on labour rights. Activities for domestic workers, street vendors and waste pickers are designed to empower and organise so that they can continue to fight for their rights.”