Campaign for Women’s Employment Rights in Timor Leste Ramps Up 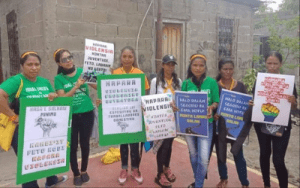 Union Aid Abroad – APHEDA has supported many important projects in Timor Leste since Independence was achieved in the 1999 national referendum. Some of our current projects include strengthening and supporting rural farmer organisations; providing advocacy, training and assistance for domestic workers aiming for fair remuneration and decent working conditions; and advocating for workers’ rights and providing campaign and leadership development training for unions. Here is a Project Update on the Working Women’s Centre Timor Leste’s project – ‘Advocacy, Education and Supporting Timorese Domestic Workers to get Legal Protection & Decent Work’.

In September 2021, WWCTL will celebrate its 10 year anniversary in Timor Leste. Sprouting from an idea seeded when APHEDA Country Manager, Elisabeth Lino de Araujo attended the SA Unions Anna Stewart Program in 2010 (and was hosted by the SA Working Women’s Centre), today WWCTL has established itself as a primary source of information for women in Timor Leste on workplace rights.

The impact of COVID-19 on workers

When the COVID-19 pandemic reached Timor Leste in March 2020, the Timorese Government was quick to respond by implementing State of Emergency lockdowns that effectively protected the population from virus transmission. As of February 2021 there have been zero COVID-related deaths although, despite compulsory quarantine and border closure, returning Timorese nationals from countries with high COVID cases (such as neighbouring Indonesia) have carried the virus into the country. Currently the municipalities of Suai (Covalima) and Bobonaro are in lockdown.

The impact of repeated lockdowns on workers has been severe, especially for vulnerable women concentrated in jobs not covered by labour law protections such as domestic workers, street vendors and waste pickers. During the State of Emergency, WWCTL highlighted the critical need for women workers to access social protections and fair working conditions via media briefings, television and radio talk shows and mapping the impact across their domestic workers membership. Read more…

The campaign to protect domestic workers under labour law

WWCTL continues to lobby for a draft law enshrining Domestic Workers’ labour rights to pass into legislation. In 2020, WWCTL Director, Ricar Pascoela was invited onto the Board of  Timor Leste’s peak NGO’s for women, Rede Feto, bringing WWCTL’s employment rights’ focus into this network of women’s organisations. In addition, WWCTL has been called on by the peak civil society body in Timor Leste (FONGTIL) to raise and promote the need for improved employment rights for women. Thus the campaign for legal recognition of Domestic Worker employment rights is operating at three levels:

The hard work of WWCTL and the progress of their campaign has not gone unnoticed by international bodies working in Timor Leste. 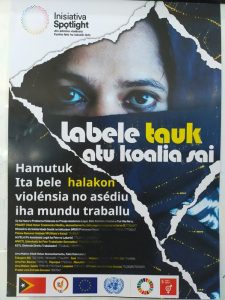 In February 2021, WWCTL was invited to participate in a joint TL Government and ILO  meeting to campaign for the implementation of ILO Convention190 (Prevention of Sexual Violence and Harassment) in Timor Leste. Ricar Pascoela raised concerns about the significant risks of workplace violence and harassment for informal workers. Ricar was also selected to take part in the review of the Timor Labor Code 2012 with a view to include C190 provisions. Ricar also proposed to the ILO that the review of the Labor Code should include progressing the draft special law for Domestic Workers.

Currently in Timor Leste, the ILO is also working with the peak union body (KSTL) and WWCTL to roll out its ’Spotlight’ campaign, launched in 2020 as part of the Global Campaign 16 Days of Activism Against Gender Based Violence to socialise the risks and impact of violence against women. WWCTL was pleased to learn that the ILO funded poster used in this campaign (and due to be rolled out across 4 districts of Timor Leste) has included the WWCTL’s Telephone Hotline Number for people to reach out with concerns about violence and harassment in the workplace.

WWCTL was an active participant in a UN Women funded Gender Analysis Report conducted between August –October 2020. Led by Rede Feto and involving 13 Women’s NGO’s, the research examined the impact of COVID-19 (and the Timorese Government’s response) for women across Timor Leste. The field work involved 1,418 women from diverse groups with higher vulnerability across 12 municipalities and included 26 discussion groups and 418 individual interviews. WWCTL was able to contribute valuable case studies about the significant impact on informal women workers and assisted in the production of a video outlining the direct impact on Domestic workers.

In February 2021, representatives from the Ministry of Prime Minister & Cabinet (Civil Society) undertook a Monitoring and Evaluation review of WWCTL, as recipients of Timor Leste Government funding in 2018. The feedback from the evaluators was overwhelmingly positive on all fronts from their robust internal and financial regulations and administration to the high standard, success and volume of their activities and empowerment of the members of the organisation.

WWCTL have applied for a National Civil Society Award and following the positive review are hoping to be approved for additional Timor Leste Government funding to enhance their work in 2021.