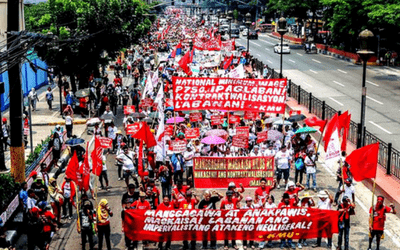 Kilusang Mayo Uno (KMU) is a trade union centre in the Philippines. Union Aid Abroad – APHEDA supports a training program for the development of KMU union organisers. The KMU was established on 1st May 1980, in the dark days of Martial Law under the Marcos Dictatorship and has since grown to represent more than 115,000 workers in both the formal and informal sectors.

Training program for the development of union organisers

The training program’s aim is to advance the commitment of workers and organisers to the trade-union movement. Its approach to trade-unionism and genuine social change through education focuses on:

Overall in 2017 almost 800 workers had their capacity built as trade union organisers.

In addition, a special training module was run for 100 workers on short term contracts.  These workers have played a key role in the campaign to end contractualization in the Philippines.

Since our last update in March 2018, the campaign has escalated to end short term contracts in the Philippines. Importantly unity has been sustained across diverse trade union centres in the Philippines, with tens of thousands of workers from both the KMU and Nagkaisa labour coalition protesting the Presidents recent State of the Nation Address on 23 July 2018. They called on Duterte to make good on his election promise to end all forms of short term contracts and raise attention to the on-going mass violation of workers’ rights and worsening state of workers’ welfare.

Under President Rodrigo Duterte, thousands of contractual workers have been illegally terminated due to the Department of Labor and Employment (DOLE) and its rulings ordering regularisation. The president’s Executive Order (number 51) explicitly states when DOLE issues compliance orders for regularisation, “the employment of [workers] shall not be terminated pending appeal of such order.”

However, instead of enforcing his own Executive Order, Duterte continues to ignore the plight of contractual workers. In fact, the Duterte administration often sides with management, ordering police to disperse legitimate protests instead of implementing DOLE rulings.

In response to this situation, there has been a surge in strikes, pickets, and other labor protests.