Unions in Myanmar Suspend Participation in the Tripartite Mechanism 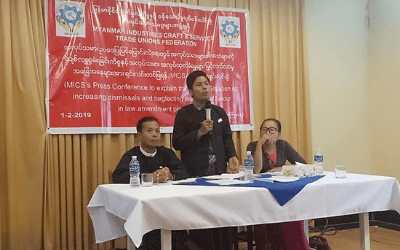 On 1 February 2019, the Myanmar Industry Craft and Service-Trade Unions Federation (MICS-TUsF) and the Confederation of Trade Unions Myanmar (CTUM) organised a Press Conference to highlight the situation regarding rampant unfair dismissal of union leaders and union busting in the Mandalay region. The Press Conference also raised the unions’ position on the labour law amendment process. MICS-TUsF and CTUM are part of a tripartite mechanism consisting of 9 representatives from the Ministry of Labour, Immigration and Population (MOLIP), 9 from registered trade unions (CTUM and MICS are among these 9) and 9 from the employers association. This tripartite serves as a stakeholders dialogue collecting inputs on the labour law amendment agenda. In late January, MICS-TUsF and CTUM suspended their participation in the tripartite mechanism due to lack of consultation and continually having their input ignored.

Lack of Consultation in the Proposed Labour Law Process

During the Press Conference both MICS-TUsF and CTUM addressed their concerns about the proposed amendment of labour laws by the Minister of Labour, Immigration and Population. These labour laws are being amended without proper consultation with the unions.

“We (the unions in the tripartite forum) proposed our amendment of the Labour Organisation Law in 2017 but our input was not taken into consideration. Now we have serious concerns regarding the new leave and holiday act which stipulates that workers can only take one day leave per month. The discussion on prison sentences for the employers in the Settlement of Labour Dispute Law (SLDL) is among other contested points that was done in consultation with the unions” said Thet Hnin Aung, the General Secretary of MICS-TUsF.

Barriers to Freedom of Association

The unions claim that the government has failed in adopting the principles of Freedom of Association in the proposed-amended Labour Organisation Law. Further, Thet Hnin Aung states that it reflects the lack of the commitment to apply the ILO Convention 87 – freedom of association and protection of the right to organise – which the government of Myanmar has ratified. The bureaucratic process of registering a union and the renewal of the registration certificate as well as threshold requirements imposed are barriers imposed on trade unions to exercise their rights to freedom of association. The threshold requirement for setting up a township-level labor organisation is to have a minimum of 10 basic unions from the same industry. To form a regional labour organisation, no less than 50 per cent of all township organisations are required in the concerned region/state.

The unions also addressed their concerns regarding the new proposed leave and holiday law stating that if a worker arrives five minutes late to work, they would lose their rights to take a day off on Sunday. This new law also reduces the annual Burmese New Year holidays (Thingyan) from 10 days to 5 days, heavily impacting workers from rural areas returning to their home villages to attend the religious ceremonies with their families.

“We have engaged in the tripartite dialogue since 2015 because we have faith in engaging in dialogue with government and employers’ representatives. However, from 2015 to now, cases of unfair dismissal of union leaders and union busting is rampant. The law fails to protect workers’ rights. We have provided inputs to amend the law but our voices remain unheard,” said Phyo Sandar Soe, Assistant General Secretary, CTUM.

Since January 25 2019, MICS-TUsF and CTUM have suspended their participation in the tripartite mechanism for a period of 14 days while taking all necessary efforts to negotiate with the government representatives to have their voices heard within the suspension period.