CoPower is a cooperative electricity retailer that aims to tackle the climate crisis by putting power back into ordinary people’s hands.

Until July 8, CoPower members can choose which community projects will receive funding in their democratic budget. CoPower has received 37 applications for funding totalling $372,553, which far exceeds the available funds of $100,000.

You can vote to support APHEDA’s climate justice projects in Nepal and the Philippines. It is number 5 on the list and is called ‘Just transition Asia Pacific frontline workers’.

In both these countries, the climate crisis is increasing the cost of living, reducing employment, and lowering take-home pay.

In the Philippines, our partner the Centre for Trade Union and Human Rights (CTUHR) has created climate justice training module. Following consultation with unions, women, environmental and church groups, CTUHR piloted the training module with agriculture workers in Northern Luzon province. A range of complex challenges were identified including union-busting and poverty wages, as well as the impacts of a recent typhoon which resulted in widespread flooding of the workers homes, including market gardens, a key source of food production for families.

This funding will allow CTUHR to continue to roll out its climate justice worker module and organise informal women workers and agricultural workers. This includes training 20 workplace / community leaders and organizing 150 workers. 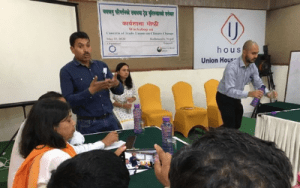 In Nepal, our partner, Centre for Labour and Social Studies (CLASS) Nepal has drafted a just transition organising manual, which engaged workers in the sectors including waste, tourism, agriculture, electricity, transport, local government, and construction. It has considered how climate change is impacting livelihoods, occupational health and safety, and economic changes including jobs losses. This funding will support CLASS Nepal to finalise the training module and pilot in strategic industries including waste sector, where the commercial capture of biogas at Katmandu landfill, is threatening workers livelihoods. This will strengthen the capacity of 20 union leaders to organize 250 workers.

The final component will support a series of online exchange for trade unionist supporting workers on the frontline of the climate crisis. Specifically, it will pay for live translation for three 2-hour online conferences in English, Bahasa Indonesian, Nepalese, Vietnamese and Tagalog for trade unions to exchange just transition approaches and collaborate on regional campaigns.

The more members CoPower has, the more resources it can direct into solidarity projects. If you’re not a member of CoPower, consider switching to help drive the transition enable positive environmental and social change.