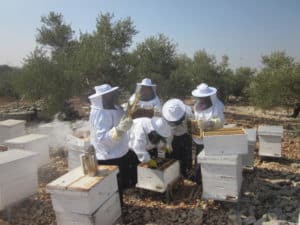 Union Aid Abroad-APHEDA works in the West Bank and Gaza with three local organisations to support small-scale farmers get quality produce to market, increase household incomes and help establish sustainable cooperative businesses. Together with the MA’AN Development Centre, Asala Palestinian Businesswomen’s Association and the University of Bethlehem, this Australian aid-funded program has ambitious goals, working in an environment where a normal ‘market’ for goods is impacted by political conflict and restrictions on the movement of people and goods. In Gaza, the blockade by Israel and Egypt is still in place and water and electricity restrictions mean life as a farmer is barely recognisable in comparison to farming life elsewhere.

Since April, the program has already helped 50 farmers transition from traditional cucumbers to smaller ‘baby’ cucumbers that are in high demand for pickling. In the past three months alone these farmers have been able to grow and sell 350 tons of ‘baby’ cucumbers for a total value of $650,000 USD! This is just the beginning. Upcoming projects linked to agriculture and food production includes rehabilitation of roads, water networks, training for farmers, pest management campaigns and investing in women-run food processing businesses.

The expertise amongst the local organisations is enormous. For example, the MA’AN Development Centre is one of the largest agricultural and youth development organisations in Palestine. MA’AN works to support farmers, youth and women in the West Bank, Gaza Strip and East Jerusalem. MA’AN received their very first financial grant from Union Aid Abroad APHEDA 26 years ago and from little things, big things have grown!

Union Aid Abroad and MA’AN have worked together over this period to train thousands of farmers in better agricultural techniques, rehabilitated more than 10 kilometres of access roads, increased water access for farmers in the West Bank by 27,075m3, and created 1,337 income-generating opportunities for women.

Together both organisations have stood in tangible solidarity with Palestinians who have suffered from the highly volatile security situation in Palestine. After the 2009, 2012 and 2014 attacks on Gaza, Union Aid Abroad and MA’AN were on the ground meeting the immediate needs and stayed for the long-term recovery. During the most recent war in 2014, Union Aid Abroad and MA’AN provided food packages to 300 families, while also helping the community recover for the long term by rebuilding greenhouses, water tanks, sheep pens, olive orchards, and four ‘safe space’ playgrounds – integral for the psychosocial recovery of children, all of which were destroyed by the Israeli bombing campaign. (read more about the 2014 War on Gaza)

Asala Palestinian Businesswomen’s Association launched a campaign through the program to highlight the discrimination against women inheritance of land and in relation to farming culture and practice. Here’s a short video used as part of the campaign

The program is working to recognise women’s labour in the agriculture process – with the first step being to document the gender wage gap. Overall in Palestine, women earn about 73% of a man’s wage (2017 statistics). However, this masks a reality for women in agriculture. The Palestinian agriculture sector employs 40% of workers working without pay, 67% of whom are women. Further, the types of tasks women undertake in agriculture are those with less decision-making and less authority.

In Palestine, 11% of families rely solely on women’s income as the primary source of living. These families cannot sustain an adequate standard of living unless the woman earns a fair wage.

Through this program, Union Aid Abroad, Asala, MA’AN and the University aim to support 10,000 farmers in Palestine increase their incomes by the end of 2020.

Brother: May God give you wellness, my sister (this is a common expression of greeting in Palestinian Arabic)
Sister: May God give you wellness as well! (a reply to the above expression)
Brother: I’m so glad you are taking care of your land, as you used to do during the life of our father, thanks to God’s mercy.
Sister: The land is the smell of our father (NOTE: the land is a reminder of her father), we inherited the land from him and we are living from it. My brothers, you were fair and you gave us our right of inheritance.
Brother: May his soul rest in peace, this land is for you and your family. Justice is the basis of life, inheritance of lands from our father is for both sisters and brothers.

The TV spot ends with roughly the following written in Arabic (NOTE: it is hard to do a direct translation of this into English)

“It is my right to Inherit: Fair inheritance maintains good relations for our family”

The Arabic above the slogans at the end reads: “Funded from” (the Australian government) “In Partnership with” (the members of the Union Aid Abroad – APHEDA consortium).