On May Day 2020, Unions Across Global South Call for Greater Worker Protections

Across the Global South, working people came together in online demonstrations, mass actions, and virtual concerts to celebrate the role of front-line workers who are protecting their communities against the Coronavirus pandemic.

Our partner unions joined the online May Day celebrations, calling for greater social protections of workers during the pandemic, democratic accountability of governments during the emergency, and the strengthening of workers’ rights in a post-pandemic world.

Here is a snapshot of their May Day actions:

In the Philippines, our partner unions, the Kilusang Mayo Uno (KMU) and SENTRO organised a virtual rally which attracted up to 50,000 viewers across the Philippines, representing an increase in usual May Day rally numbers.

In the virtual demonstration, our partner unions demanded that the Duterte regime respect the rights of workers during the COVID-19 crisis, and to not abuse the power of the military to crack down on union organising:

“We will not allow this physical lockdown continue as a lockdown against our civil, political and human rights”

To make sure that tragedies like today’s pandemic do not happen again, we must collectively build social power from below. Through our unions, organizations, networks, and political formations, we must make every effort to build a truly just and human global order. For workers, returning back to the normal of low wages, precarious work, and weakened unions should be out of the question.

“The struggle continues” in Timor Leste, even in times of crisis

📢 Medical solutions, not military actions! On May Day in the Philippines, our partner union Kilusang Mayo Uno is…

Even in times of crisis, "a luta continua!" 💪

On May Day in Timor Leste, our partner organisation, the Working Women's…

Our partner organisation in Myanmar, Myanmar Industry Craft Services –Trade Unions Federation (MICS-TUsF), released their annual May Day Statement via a series of videos (in Burmese language). Speakers each read an Article from the Statement covering key issues including the minimum wage, the upcoming General Election, child labour, workplace health and safety and the importance of trade union input into the proposed amendments of the Labour Organization Law and Labour Dispute Settlement Law. Here is an overview of the May Day Statement:

Daw Moe Moe Aung, kicked off the May Day Statement videos with a greeting of solidarity to all workers and acknowledged the decision not to hold a gathering due to COVID-19.

Daw Sandar Aung, Secretary of the Women’s Committee, read Article 3 of the Statement and presented on workplace safety and health. Daw Sandar Aung talked about MICS’ engagement in the formulation of OSH Law and Policy since 2012. MICS calls on the government to intensify OSH inspection of workplaces to ensure employers comply with OSH laws enacted in 2019. 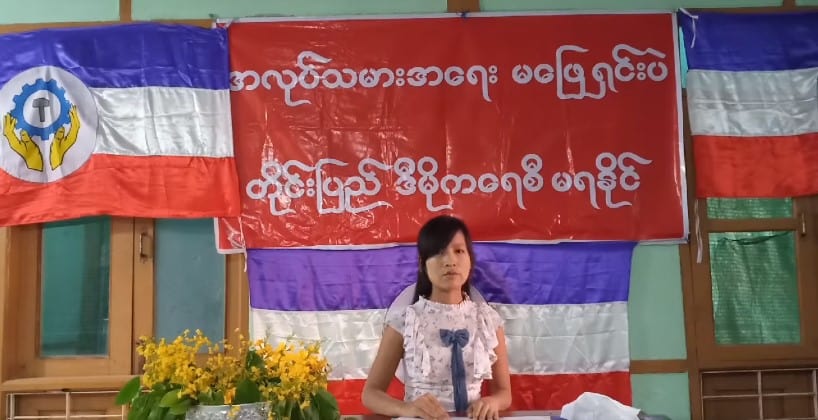 Thint Sein Soe, a member of the Central Executive Committee, reported on the issue of child labour in Myanmar and how almost a million children under the age of 14 work in hazardous workplaces. During the recent Tripartite Dialogue, MICS addressed the types of hazardous work being performed by child labourers. This is in line with Myanmar’s commitment to eliminate child and forced labour.

Aye Aye Myint, Central Executive Member, read Article 6 – a report on Labour Law Reform. Aye Aye Myint discussed the importance of trade unions in providing critical input into the proposed amendment to the Labour Organization Law and the Labour Dispute Settlement Law. These laws must serve as legal protection for workers on the ground and the Parliament must take into account input from unions in passing the law.

U Maung Kyaing, President of MICS, read Article 9 and 10 of the Statement. He called on workers to vote for candidates whose political agenda favoured workers in the upcoming General Election. President U Maung Kyaing also emphasized the issue of internal migrant workers in the context of labour mobility from rural to urban areas, calling on the government to facilitate skill training to adjust with production technology. Migrant workers are entitled to know their rights and have their rights protected.

The Minimum Wage in Myanmar is the lowest among ASEAN countries.

MICS demands the government and employers set the minimum wage based on the cost of living so that the dispute over wages can be mitigated.

The health and economic crisis is hitting us all, and it will hit hardest those already struggling for a dignified livelihood, those communities already fighting against injustice and exploitation.

Let’s continue the long tradition of Australian union solidarity with communities living under poverty and oppression who are taking action to strengthen their public health, share life-saving information, and hold governments and corporations to account.

Donate to the COVID-19 Solidarity Fund