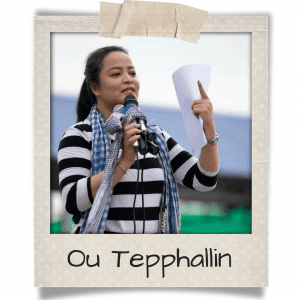 Meet Ou Tepphallin. Ou Tepphallin is the President of the Cambodian Food and Service Workers’ Federation (CFSWF), an independent union federation of food and service industries organising to improve working conditions, wages, and occupational health and safety. Ou Tepphallin started out her working life as a beer promoter in the entertainment sector. Over the years, she has graduated as a Bachelor of Law, undertaken training courses on human rights and labour rights and worked her way from a general assistant at CSFWF to Vice President and now President.

What is your role at CSFWF?

I am currently the President of the Cambodian Food and Service Workers Federation (CSFWF). This entails overseeing the daily operational management; designing, developing and implementing strategic plans for the organisation; communication and building relationships with stakeholders and alliances as well as consultation and policy for overall campaigns.

How long have you/CSFWF been working with Union Aid Abroad – APHEDA projects?

CFSWF has been working with and receiving support from APHEDA for more than a decade – since 2006. Union Aid Abroad – APHEDA supports our program focusing on organising entertainment workers, raising awareness about Occupational Health and Safety in the workplace and supporting efforts to claim labour protection for one of the most vulnerable groups of workers in Cambodia. This sector is comprised of 90% women. This is a sector I have a close personal connection to. In 1999, my family faced a crisis so I decided to leave school in Grade 10 to support them as best I could. My first job was as a restaurant beer promoter.

Working with entertainment workers on Occupational Health and Safety at the workplace level as well as raising awareness about basic rights in the workplace. I like to see workers organising and exercising their union rights and bargaining rights and the right to assemble at their workplace.

What are some of the challenges your organisation faces?

The freedom of association, right to bargaining and right to assembly are big challenges facing independent unions like CFSWF. The trade union law in Cambodia is problematic; it restricts workers from exercising basic rights in the workplace. We need to overcome many issues to form a union to protect our rights and negotiate with employers.

I became President of CSFWF in 2017 and as a woman representing a union, I face a number of personal challenges. These include harassment by parties we are negotiating with, as well as security when I have to travel home late at night.

What are the difficulties faced by women workers in Cambodia?

The right to access to Maternity Leave is a big problem for women workers. The Labour Law sets out an obligation for employers to provide 50% of the basic salary to women workers. Yet most women who work in the entertainment sector do not understand their rights and their employers’ obligations. Women working in the sector face other issues. Women tend to hide their job, even from their parents, due to the stigma associated with entertainment work from the community.

Find out how you can help support women’s unions in Cambodia.

Why is it important to build stronger trade unions in Cambodia?

Currently, our struggle is with the government of Cambodia to respect fundamental rights. Unions are vital to improve benefits and living conditions for workers and deliver important policy changes. When we organise workers and bring them into the fold of solidarity with fellow workers, they can influence employers to respect the basic rights of all workers.

APHEDA is the global justice organisation of the Australian union movement. What does it mean to be union to you?

Independent unions are very important for workers, especially vulnerable groups in the labour market. I believe that only the power of unions can bring about policy changes by influencing lawmakers and negotiating for improved dignity and rights for workers; to ensure that workplaces are green and to reduce the gap between rich and poor by sharing economic justice to working people.

APHEDA always stands with CFSWF by supporting the union movement in Cambodia. This is especially important for women workers who are a minority and are the most vulnerable group of workers. Through APHEDA’s support of CSFWF, together we are helping these workers understand their basic rights, improving labour rights and fighting for better conditions for women workers.

Why do you think it’s important for people to join APHEDA?

In Cambodia, the Labour Law established in 1997 was very new and workers exercising their rights were inexperienced and the union movement was very young.

At the moment, workers in different sectors struggle to defend and demand their rights while the Trade Union Law is an obstacle for women workers and vulnerable groups who have started to stand up and speak out about violence in the workplace and who are demanding safety at work.

I have experienced firsthand the project supported by APHEDA as a participant. I underwent training to build my capacity while I was working as a beer promoter. It was because of APHEDA’s support of CFSWF that I could improve my capacity, skills and knowledge and become a union leader in CFSWF with the confidence to lead and take responsibility. Growing APHEDA’s membership base means APHEDA can continue to support important projects like the one that has helped me.

Become a Global Justice Partner today and contribute to Union Aid Abroad – APHEDA’s work around the globe. Yes, sign me up!