Shaking things up at COP 8 of Rotterdam Convention

The Rotterdam Convention meeting took place in Geneva in May 2017. Despite the listing of chrysotile asbestos being blocked yet again, solid progress was made in strengthening alliances between trade unions and NGOs interested in achieving a global ban as well exposing the lies of the asbestos industry.

At the 8th meeting of the 157 parties to the Rotterdam Convention in May, the listing of chrysotile asbestos was blocked for the 6th time, led by Russia and India. This deplorable action was not surprising given Russia and India’s track record and interest in protecting their dirty asbestos industry. They protect the asbestos trade without regard to the rights of other countries or their populations to know the hazards of the “deadly dust”.

However good progress was made in the battle to expose the lies of the asbestos industry. Good progress was also made in opening the topic of reforming the convention itself, says Phillip Hazelton, Union Aid Abroad’s representative at the meeting.

The Global Alliance for Action on Asbestos

Together, a coalition of organisations worked under the banner of the Global Alliance for Action on Asbestos. The coalition campaigned to reform the convention and to attempt to finally break the veto of a handful of countries. The Alliance brought together ITUC, IndustriALL and Building and Woodworkers International (BWI), union representatives from Australia (ACTU, AMWU, CFMEU, Union Aid Abroad) Canadian Labour Congress (CLC), Union for Canada (Unifor), Unite the Union (UK)  and ban networks and organisations Asia Ban Asbestos Network (A-BAN), Asia Monitor Resource Centre (AMRC), Solidar Suisse and Occupational & Environmental Health Network of India (OEHNI). Also in the Alliance were Rajendra and Siti – who both suffer asbestos related disease. Rajendra and Siti were able to bring the shocking reality of the continued asbestos trade directly to the delegates. Indonesia’s Local Initiative OHS Network (Lion) and Vietnam’s Vietnam Ban Asbestos Network also brought their experience to the convention.

The Alliance organised a range of demonstrations, direct interventions, media events, side workshops, country-based lobbying and protests actions over the 2 weeks of the conference. These actions brought wide global media coverage exposing the fatal flaws with the convention including its hijacking by a small group of pro-asbestos countries operating out of economic self-interest. The ACTU played a vital role in coordinating the pre-COP planning, setting the scene to really shake things up in Geneva. 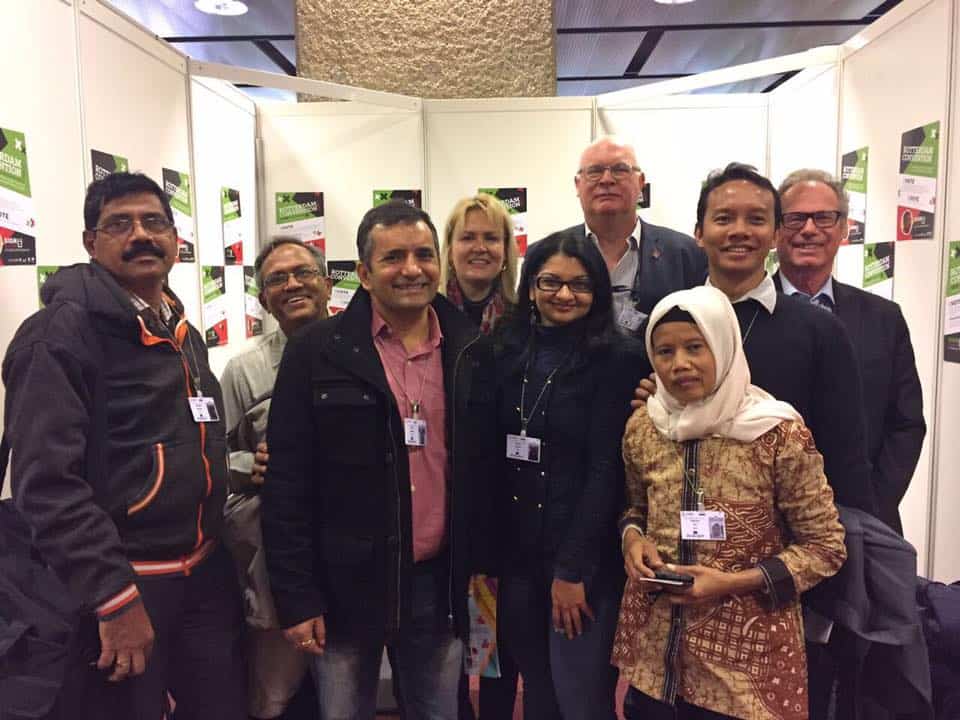 Members of the Global Alliance for Action on Asbestos

“The asbestos awareness campaign we have supported in South East Asia has helped bring countries like Vietnam, Laos and Indonesia into the support listing chrysotile camp. Reform of the Rotterdam Convention is now a live, international issue.” Andrew Dettmer, AMWU President

Siti and Rajendra – victims of the global asbestos trade

Representing those suffering asbestos related diseases globally, asbestosis sufferer, Siti Kristina a worker from Indonesia, called for action and brought the reality of asbestos to the full plenary audience at the meeting.

“I was exposed to asbestos in the factory for 23 years. If asbestos got under our clothes it was difficult to remove it. After ten years I started coughing. In 2010, I was diagnosed with asbestosis. I am just one and so many of friends have been suffering as well.”

Rajendra Pevekar from India, another suffer of asbestos related disease, was the focus of the global “Stand With Rajendra” petition that Union Aid Abroad organised and handed to the Convention President as part of a media event held at the meeting. Rajendra also spoke strongly at media and side events on the urgent need for listing of asbestos, the pro-asbestos position of his country and the need for reform of the convention itself.

The 2017 Rotterdam Convention meeting saw developing countries fighting back against those denying importing countries Prior Informed Consent of hazardous materials entering their borders. Twelve African countries, fed up with constant blocking of some chemicals, proposed reform of the convention by allowing a 75% voting to list a chemical instead of full consensus. This was hotly debated as importing countries demanded their rights to know and Russia and India were forced to fall back on old discredited arguments and bullying tactics to try to block any reforms.

Reform was not successful this time but congratulations to Cameroon and Malawi and the 10 other African countries supporting the amendment. The hot argument lasted till the last hour of the 2 week meeting and the reform is now a real possibility in the future. The fight for reform of the convention was completely validated with chrysotile asbestos being blocked once again. Russia and 5 other countries continue to deny the will of over 90% of countries present to list it. The full list of countries blocking listing of chrysotile this time were Russia, India, Kazakhstan, Kyrgyzstan, Zimbabwe and Syria. Shame on them!!!

So a hard, frustrating but important battle in Geneva. These 6 countries are more and more isolated. The failure to list chrysotile asbestos at the convention only underpins our efforts to achieve national bans across Asia, to reform the convention itself and then finally achieve an effective global ban on this killer.

Media and other links: