What is the Australian union movement doing to support workers in countries where they haven’t even had their first dose yet? While we are getting our second, and discussing booster shots, there are workers in many parts of the world who haven’t had access to the vaccine at all. This is a big issue, but these workers deserve our solidarity.

At Union Aid Abroad – APHEDA we strongly support solidarity with workers internationally. We understand that the global pandemic has yet again tragically exposed and exacerbated the inequality and disparity within and between countries and regions to human rights, health rights, worker’s rights and highlighted the total crime of unequal access to vaccines and treatments.

The union movement has been campaigning to achieve affordable access to vaccines for everyone. In this global emergency, governments and pharmaceutical companies need to put people before mega profits – especially since vaccines were developed with the use of public subsidies.

Our solidarity has included working with the Australian Council of Trade Unions to campaign for a waiver on patent rules relating to COVID-19 response at the World Trade Organisation (WTO), along with several other agencies including AFTINET, Amnesty, Oxfam and Action Aid. We have participated in many actions to pressure the Australian Government to support this campaign. This includes a petition with ACTU and APHEDA that gained over 12,000 signatures as part of a total of 52,000 by combined agencies. We also co-funded polling via Essential Media to help convince the government that a majority of Australians supported a waiver of patent rules. 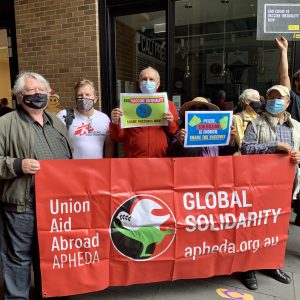 APHEDA took part in a rally outside Pfizer’s office in Sydney on November 22.

On 7 September, the Australian Government bowed to this pressure and confirmed it will support the TRIPS waiver at the WTO. However, since then it has decided to “encourage both [camps] to show flexibility with a view to ensuring that we can have a consensus outcome”.

We are continuing to work with other groups to apply pressure on other wealthy countries and pharmaceutical companies to support vaccine equality. On 22 November, Union Aid Abroad-APHEDA participated in a vigil outside Pfizer’s Sydney office  The rally called for Pfizer to share its knowledge of vaccine production with low-income countries and put health above profits. Speaking at the rally, Kate Lee, Executive Officer of Union Aid Abroad-APHEDA said: “We demand real and equal access to COVID-19 vaccines and other related products technology, so the global south can ramp up their own production.”

We are also helping our partner organisations globally to respond to the crisis. In Indonesia, union campaigners adapted their campaign to ban asbestos to helping the COVID-19 response. It now continues with a mix of support to both COVID response and asbestos ban campaigning. We also moved focus to include COVID-19 responses in other countries and regions such as Thai/Myanmar border, Philippines, Timor Leste and Lebanon/Palestine.