Five things (+1) to know about the Karen struggle 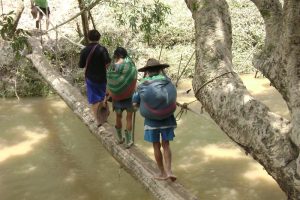 The Karen struggle has been ongoing for 70 years. From the initial breakout of conflict on 31 January 1949 to today, armed conflict is rife and the situation remains challenging for both the Karen people and the environment.

Here are not five but six things you need to know about the Karen struggle.

1. The Karen have been fighting for autonomy for 70 years

Myanmar gained independence from Britain on 4 January 1948. A month later, four hundred thousand Karen peacefully demonstrated calling for the creation of a Karen State. The Karen conflict officially broke out in 1949 and the Karen Free State of Kawthoolei was proclaimed by Karen National Union (KNU) in June 1949. The first KNU President, Saw Ba U Gyi, announced the four principles of the Karen struggle:

Over the decades, the struggle has seen a number of internal rebellions and reform under the leadership of General Bo Mya. In 1976, their demands changed from outright independence to autonomy. The KNU reached their height of power in the 1980s and early 1990s. After which disunity resulted in the split into a number of different armies weakening the influence of the KNU.

The current situation in Karen State remains challenging. Conflict is ongoing and displacement and land grabbing are rife due to development and multinational corporations planning large infrastructure projects.

2. Karen Refugees have been living in camps in Thailand since 1984

The first refugees began crossing into Thailand in 1984. By the mid-1990s, tens of thousands of Karen refugees were living in camps along the border with a further 10,000 spilling into Thailand after the fall of Manerplaw in Karen State in 1995.

Refugees and internally displaced peoples (IDPs) living along the Thai-Burma border face a dire situation marred with uncertainty. While the official government policies of both Myanmar and Thailand is to encourage the repatriation of refugees from the camps back to Myanmar, renewed clashes in Karen State leave many refugees with little hope that they could safely return to their home villages. Against a backdrop of ongoing funding and rations being cut to all refugee and IDP camps and with the announcement of funding to Ei Htu Ta IDP camp being cut completely, Union Aid Abroad APHEDA’s long-time partner organisation, Karen Women’s Organisation (KWO) has been working closely with camp residents to sort through their options. People living in Ei Htu Ta, feel they have no options. Around 300 people returned to their villages in 2017 but those who remain have little hope. They have nowhere to go as their villages have either been destroyed or are sandwiched between Myanmar army military bases. KWO continues to work with the most vulnerable people within the camp as there are no more international NGOs left to support them.

While the situation facing Rohingya women has received recent media attention, the use of rape as a weapon of war in Myanmar is not new to the Karen. Over the years, KWO has been documenting prolific sexual violence in eastern Myanmar (read ‘Shattering Silences’) and has more recently documented cases of Sexual and Gender Based Violence (SGBV) taking place in refugee camps along the Thai-Myanmar border (read ‘Salt in the Wound’). This was followed by similar reports by women’s groups in Karen, Kachin, Mon, and Chin states, as well as national reports by the Women’s League of Burma, paving the way for UN agencies and experts to address this widespread and systematic problem. The climate of ongoing sexual violence has also made women and girls more vulnerable to trafficking and other forms of exploitation.

4. Women lead the struggle for peace, democracy and equality in Karen State

The Karen Women’s Organisation (KWO) have been leading the struggle for peace, democracy and equality in Karen State since they were formed in 1949. KWO is a member-based organisation working in development and relief in the refugee camps on the Thai-Myanmar border, and with internally displaced people (IDP’s) inside Karen State, Myanmar.

KWO has over 60,000 members with branches in all Thai-Myanmar border refugee camps, and in seven districts in Karen State, Myanmar. KWO actively promotes women’s participation in community decision making and political processes and are tireless defenders of women’s rights. KWO strongly believe that the contribution of women is an essential factor in the peace-building and national reconciliation processes of Myanmar.

General Secretary, Naw K’Nyaw Paw, spent her childhood on the run from conflict in Karen State. Under her leadership, KWO was the first of three women’s civil society organisations in Myanmar to publicly condemn the military-led violence against the Rohingya. In March 2019, Naw K’Nyaw Paw was honoured for her contribution to peace, democracy and equality winning the US International Women of Courage Award. The Award recognises women who have demonstrated exceptional courage and leadership in advocating for peace, justice, human rights, gender equality and women’s empowerment.

You can hear from Naw K’Nyaw Paw in August during her speaking tour to Australia. Stay tuned for the official schedule or secure your tickets to the Sydney APHEDA Dinner featuring Naw K’Nyaw Paw as guest speaker. Book now!

5. Fighting for the environment and protecting country

The Karen have not only been displaced by conflict but also by land grabbing by both the Myanmar Government and by multinational corporations seeking to build large infrastructure projects like dams. Our partner organisation, Karen News, recently produced a short video about the fight for the Salween River, ‘We want peace, not dams’.

We want peace not Dams from Karen News on Vimeo.

6. The Karen diaspora are flourishing in Australia

In 2010, the small Victorian town of Nhill began its transformation into a multicultural success story thanks to 200 Karen refugees who had begun to settle there. A 2015 Deloitte Access Economic report found that the increased labour supply from Karen settlement had added $41.5 million to the local economy. Meanwhile, in Bendigo, Karen has become the second most commonly spoken language with around 1,000 community members arriving since 2007. Like Nhill, Bendigo has seen a positive economic impact from Karen workers who have contributed $67.1 million to the local economy.

In NSW, refugees from eastern Myanmar are putting down roots in Wollongong (literally!). A community gardening project is helping refugees overcome the challenges of migration while establishing thriving community gardens in vacant plots of land.

In March this year, a cleaning company formed by group of Karen refugees in Canberra struck a deal with Airbnb. Harmony Community Cleaning was set up after 22 Karen cleaners took a Canberra company to court for underpayment. In 2015, the company was found guilty and the Karen refugees formed their own cleaning company with the help of United Voice ACT. Harmony Community Cleaners now operates using an online platform with the aim to provide more permanent jobs for refugees.