Women lead the struggle for peace, democracy and equality in Karen State 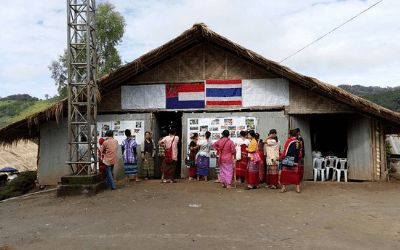 Formed in 1949, the Karen Women’s Organisation (KWO) is a member-based organisation of 64,300 indigenous Karen women based on the Thai-Myanmar border. KWO works all the refugee camps on the Thai-Myanmar border, including the two Internally Displaced Peoples (IDP) camps, and also in seven districts in Karen State, Myanmar. Since inception, KWO has shifted their focus from purely providing social welfare services, to promoting women’s participation in community decision making and political processes and defending women’s rights. KWO has long advocated that the contribution of women is an essential factor in the peace-building and national reconciliation processes of Myanmar.

The situation for refugees and internally displaced peoples (IDPs) living along the Thai-Burma border has seen little improvement. While the official government policies of both Myanmar and Thailand is to encourage the repatriation of refugees from the camps back to Myanmar, renewed clashes in Karen State leave many refugees with little hope that they could safely return to their home villages in Myanmar. Against a backdrop of ongoing funding and rations being cut to all refugee and IDP camps and with the announcement of funding to Ei Htu Ta IDP camp being cut completely, KWO has been working closely with camp residents to sort through their options. People living in Ei Htu Ta, feel they have no options. Around 300 people returned to their villages in 2017 but those who remain have little hope. They have nowhere to go as their villages have either been destroyed or are sandwiched between Myanmar army military bases. KWO is working with the most vulnerable people within the camp –disabled children and their families and the elderly. There are no more international NGOs left to support them and the situation is dire.

At last year’s KWO Congress, leaders affirmed and expanded their commitment to feminism, federalism, and indigenous rights. These values are the core of all of KWO’s work and KWO believes it is these values that will move both their country and community forward. There are currently 1,617 women working in KWO projects or as elected position holders or general staff. KWO runs 18 community development projects including the Capacity Building for Karen Women project which is supported by Union Aid Abroad – APHEDA.

The KWO Capacity Building for Karen Women project that APHEDA supports in partnership with the Australian Aid program provides women in communities and camps with the opportunities to gain skills that will enable them to fully participate in community leadership roles. Capacity Building also helps to promote peace building through improving access to information about preparedness, return and repatriation – all important steps involved in the dignified return to Myanmar when the conditions are safe and right to do so.

In 2016-17, KWO’s Capacity Building for Karen Women Project saw an increased number of requests to hold workshops on ‘Federalism’ as there was a strong belief from some leaders that communities don’t yet fully understand the benefits of federalism which would give Karen communities more self-determination.

Speaking up and speaking out

KWO was one of the few organisations of Myanmar prepared to make public statements against the persecution of Rohingya people during the crisis in Rakhine state in late 2017. KWO have been speaking out for decades on sexual violence committed by the Myanmar army in Karen State and the use of rape as a weapon against other ethnic minority women in Myanmar including the Rohingya, the Kachin and the Shan.

Note: in 2014 the Myanmar army signed the International Declaration to End Sexual Violence in Conflict. Yet there is little or no movement towards enforcement or to change the longstanding practice of using rape as a weapon of war.

It’s set to be a big year with KWO expecting at least 1,025 community leaders and members, mostly women, participating in the program in the refugee and IDP camps and in Karen State.

Overall the project will continue to strengthen KWO’s capacity to contribute to the peace process, as well as to provide essential services to the Karen refugee and village communities. KWO prioritises building the capacity of members and leaders so that the organisation can be democratically run and implement effective activities for community benefit now and into the future

Union Aid Abroad – APHEDA is currently supporting KWO’s ‘Capacity Building for Karen Women (Thai-Burma border)’ project which also receives support from the Australian Government through the Australian NGO Cooperation Program (ANCP) and the Australian Education Union. This project provides women in communities and refugee camps with the opportunities to gain skills that enable them to fully participate in community leadership roles.