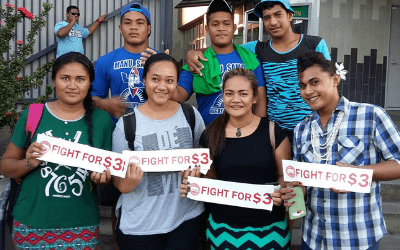 Private vs public sector in Samoa

In Samoa, there is a vast difference between work life in the public and private sectors. In the public sector, the Samoan Government does a decent job of meeting its obligations and standards. However in the private sector, the saddest aspect of work life is that there is a strong culture of non-compliance with the national laws – few employers follow laws or obligations.

Samoa is not a cheap place to live and work. The legal minimum wage is $2.30 Tala an hour (approximately AUD$1.20). The minimum wage is so low that all that can be bought for that amount of money is a bread roll (but no butter), or two bottles of water. It is not even enough to buy a can of Coca-Coladespite it being manufactured in Samoa (a can of Coke costs $2.50 Tala). For further comparison, a McDonald’s Big Mac meal costs $22 Tala. The point of using these examples is to illustrate the fact that the Samoan minimum wage is so low, it doesn’t buy very much at all.

Workers in the informal economy

In the informal economy, most workers don’t even get paid the minimum $2.30 Tala an hour. In fact, a majority of people don’t even know that there is a legal minimum wage.  Employers are just as ignorant and appear not to be educated by the Government to understand their obligations and responsibilities under the law. This culture of non-compliance undervalues work and workers in Samoa. It is difficult to attain accurate figures for the rate of unemployment or underemployment in Samoa as there is no social welfare system and it is up to the customary groups to look after their own.

SFU understands that it is important to establish a minimum wage that is going to uplift the lowest paid workers. In July 2018, they began an education campaign to explain what the legal minimum wage is and the importance of lifting it. The response from the community has been positive and this action is as much an education about workers’ rights as it is about building a base of informed people to understand why a minimum wage is important. Small business owners could understand that if all workers were paid more than their shops would have more customers.

There is some general support for the increase to the minimum wage but it’s been a long time coming for any action to be seen. In January, the Deputy Speaker of Parliament Nafo’itoaTalaimanuKeti, supported the call to lift the minimum wage.

However, some members of Parliament spoke against an increase arguing it would be costly for business and employers may face no other choice but to lay off workers. This is a common argument in economies around the world and is witnessed each year in the debate to lift the minimum wage in Australia too.

The gap between the working poor and the rich is very wide in Samoa. The Government is targeting Pastors, Ministers and Priests and is seeking to make them pay tax as ordinary workers but has not come up with a plan to improve the quality of living for the poorest of workers.

Building a fairer Samoa for all workers

The minimum wage campaign is a key opportunity for Samoa’s workers to build a strong voice for themselves and to be a part of developing a new plan which is fair for all and which does not discriminate according to employment sector.

SFU’s Saina Tomi said “Many workers cannot budget according to what they get paid for, and with the priorities they have. Loans are the only option but this gives them much more burden in the long run.”

Last week, a worker talked to Saina about the minimum wage. He said

“It’s not an easy job to do each day, especially working hard during the day when the sun is getting hotter and hotter. But due to my situation, I am the only one who is working and I am responsible for taking care of my family; in particular, taking my kids to school. I’ve been working for four years now and still only receive $2.30 an hour. Sometimes, I feel like giving up but when I think of my kids, I realise that I am the only source of income. I have to urge myself to go to work every day. Payment only lasts until the weekends and sometimes there are family matters that suddenly come up like funerals. I find it difficult to decide whether I should put family matters first or my children. Being the head of the family, I am responsible for paying our electricity and water bills. You can imagine our struggle and I can’t bear to and predict the future for my family. It doesn’t make sense. The struggle of earning only $2.30 for an hour sums up all the difficulties I am facing now and into the future.”