Sex workers gather in Cambodia to oppose violence and discrimination

The International Day to End Violence Against Sex Workers is held every year on 17 December. Also known as Red Umbrella Day, it is a day to campaign for safe working conditions, and to remember sex workers who have died from violence. 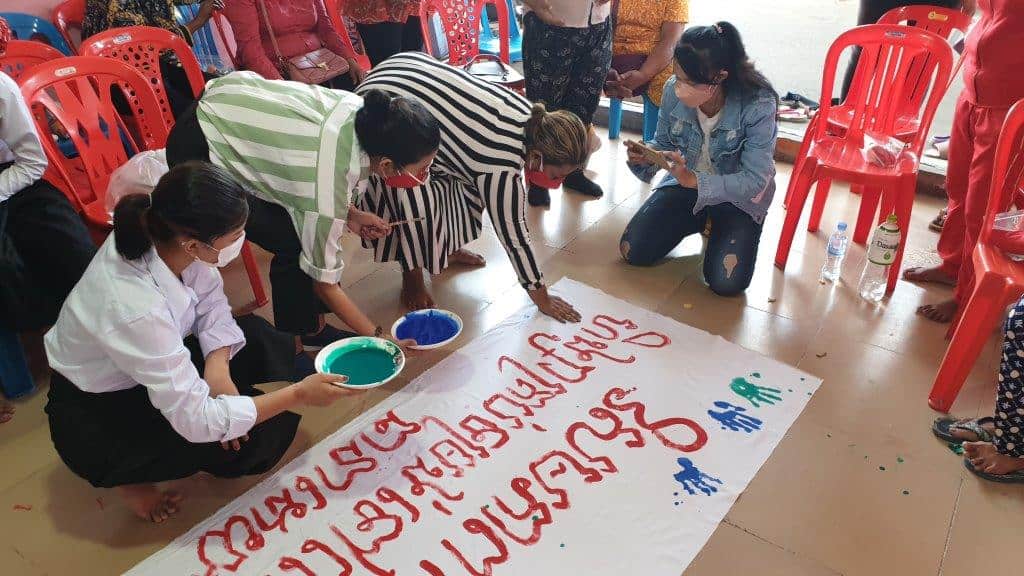 In solidarity with people around the world who trade or sell sex, the Cambodian Prostitutes Union (CPU) gathered in Phnom Penh to call for an end to inequality, discrimination, and the many forms of violence that they and their communities experience.

CPU members and supporters met in the community where they work and live to raise awareness about violence against sex workers, and the laws that enable it to continue. Importantly, after more than 18 months of severe hardship brought on by COVID-19, the event celebrated the vibrancy of the Phnom Penh sex workers and their commitment to the fight for sex workers’ rights.

Dyna, president of CPU, kicked off the event with an overview of CPU members’ experience of violence and the unions’ efforts to combat it. In preparation for the day, sex workers collaborated to develop messages they wanted to share with the community and local media. As part of the action, a message was painted onto a banner and union members added their painted handprints in a show of their strong support. The banner was taken into the community along with red umbrellas, the symbol of International Day to End Violence against Sex Workers.

Union Aid Abroad – APHEDA has supported the Cambodian Prostitutions Union for more than 20 years. Established in 1998, it was set up by sex workers to help promote and protect their rights as workers, provide information about preventing HIV, and help sex workers access health and legal services. The organisation has played an important role in reducing the rates of HIV/AIDS in Cambodia, which at one time had the highest rates of HIV infection in Asia, through outreach work and distributing condoms. It has also challenged the draconian laws introduced in 2008 that criminalised sex work under the guise of stopping trafficking. More recently, they supported sex workers through the COVID-19 crisis that saw many workers suffering from food shortages and homelessness.