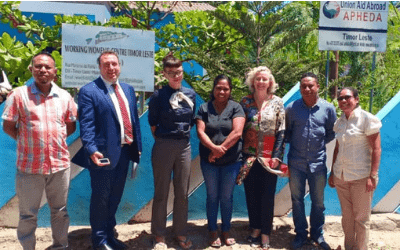 Union Aid Abroad – APHEDA has supported many important projects in Timor Leste since Independence was achieved in the 1999 national referendum. Some of our current projects include strengthening and supporting rural farmer organisations; providing advocacy, training and assistance for domestic workers aiming for fair remuneration and decent working conditions; and advocating for workers’ rights and providing campaign and leadership development training for unions. It was an honour to share insights into these projects with the Honourable Sharon Claydon MP and Australian Ambassador to Timor Leste, Peter Roberts in late 2018.

Working with farmers, workers and women in Timor Leste

On 30 October 2018, Union Aid Abroad – APHEDA’s Country Manager in Timor Leste, Elisabeth de Araujo welcomed Sharon Claydon MP and Australian Ambassador to Timor Leste Peter Roberts to our Timor Leste office. Ms Claydon was in Timor Leste as part of a delegation of the Australian Federal Parliament to discuss bilateral cooperation. Elisabeth gave an overview of the history of APHEDA in Timor Leste and the projects we have been working on over the years.

APHEDA was also proud to introduce Ms Claydon and Mr Roberts to representatives from our partner organisations – Working Women’s Centre Timor Leste (WWC-TL), the General Workers Union (SJT-TL) and Kdalakak Sulimutuk Institute (KSI). Between them, they represented women, farmers and workers and each shared information about their projects.

The Working Women’s Centre highlighted their long-term focus on identifying and supporting Domestic Workers across Timor Leste whose working conditions have not previously been regulated. WWCTL’s research and campaigns have led to the Timorese Government drafting legislation to recognise Timorese Domestic Workers and provide them with the same employment rights enjoyed by other Timorese Workers under the Labour Code. This new legislation is currently before parliament awaiting final approval and promulgation.

In addition, the WWCTL launched Timor Leste’s first telephone hotline for women workers in November 2018, offering industrial advice and referrals to women from all industries. This hotline has already attracted a lot of interest across industries and connected women workers to key support services.

Representing KSI, Co-Coordinator, Jenito Santana gave an overview of KSI’s “Strengthening and Supporting Rural Farmers’ Organisations in Timor Leste” project. This project is supported by the Australian Government through the Australian NGO Cooperation Program (ANCP). The project supports local farmers in their access to land and profits in a way that is collective, independent, and sustainable. This is achieved by providing assistance to local structured farmer’s organisations who work collectively towards a national voice for farmers in Timor Leste.

APHEDA’s Country Manager Elisabeth acknowledged DFAT for supporting Union Aid Abroad’s three agricultural partners – KSI, IEP and UNAER – to achieve the objectives of this four-year project. KSI’s work organises farmers across five municipalities of Timor Leste through their support for collective community bases at the local level. On 8 December 2018, the municipality of Liquica also declared their own farmers union named MPRAL (Movemento Popular Redorma Agraria Liquica). The next district to declare their own Farmers’ Union will be Suai (Covalima) expected in March 2019. Through this project, Union Aid Abroad’s agricultural partners are consolidating elected bodies to represent them locally who can advocate their issues with the Timorese government.

General Secretary Almerio Vilanova of the General Workers’ Union of Timor Leste (SJT-TL) acknowledged that the union celebrated 10 years of representing workers in Timor Leste on 19 October 2018. Currently the union represents members in the hospitality, commerce (retail) construction and industry sectors. In 2017 the union established an office in the district of Oecusse (Special Economic Zone) where many large infrastructure projects are underway and has achieved excellent bargaining outcomes with the major construction companies signing on to collective agreements with members over the past 18 months.

Due to political instability in Timor Leste there are continuing financial risks for small business and public sector employees while the country operates on a month by month government budget. The union continues to actively campaign and organise, attempting to address churn brought about by business closures. The SJT-TL also supports the many Timorese seasonal workers who travel to Australia for 3-6 month work placements, presenting at pre-departure briefings and providing advice on union membership and workplace rights in Australia.

Union Aid Abroad – APHEDA welcomes all Australian parliamentarians who want to visit our overseas projects and gain an understanding of the issues faced by workers in our region.

“Huge thanks to Elisabeth and her remarkable team at APHEDA in Timor Leste. It was such an honour to meet with you and the Working Women’s Centre, KSI and SJT-TL to hear firsthand about the great work you are doing to support women, workers and farmers. Thank you!” Sharon Claydon MP